New Posts
How to Remove Scratches from Sunglasses
Look for These Changes When You Visit a...
Easy and Delicious Banana Bread Recipe
Scrumptious Easy Chicken Pot Pie Recipe
5 Things I Wish I Knew Before I...
10 Favorite Hamilton Quotes to Make You Smile
6 Amazing Self-Help Books to Read Now
What You’re Giving Away in Those Social Media...
What’s That Your Ancestor Died From?
LWB Most Popular Posts of 2019
Bargains & Finds 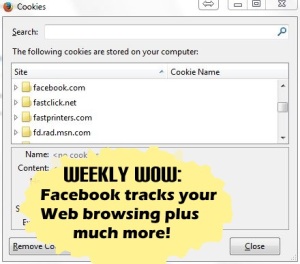 A Wall Street Journal analysis of the fine print of Facebook’s Terms of Service indicates that the social media behemoth permits itself to track users’ Web activity. By monitoring the other Web sites that you visit, Facebook can more accurately pinpoint which advertising would interest you.

Facebook tracks your Web browsing activity using a cookie, or small text file stored on your computer’s hard drive. Many Web sites use cookies to store information about you. A cookie allows Amazon to remember you and identify you by name the next time you visit, for example.

Facebook insists that they do not share the gathered data with outside parties. The WSJ article includes instructions on how you can find out what data Facebook has gathered about you. Shared via @ColleenToumayan and @deborahgage.

In the wake of controversy over Yelp’s court-upheld right to decide which reviews it displays, Congress has introduced a bill that would ensure that companies can’t keep customers from posting negative or positive reviews online. According to a Social Times article, the proposed law would, for example, make it illegal for a hotel to charge guests $500 for leaving negative online reviews.

California Governor Jerry Brown, the article says, signed a similar law last week, with the support of Yelp, and the state will now work to weed out anti-consumer contracts which violate the new legislation. Shared via ‏@jeffdezenpr.

According to a Guardian article, a Russian cosmonaut about to blast into space was subjected to questions about her hairstyle and how her teenage daughter will cope with the separation. Yelena Serova, only the fourth Russian woman sent into space, responded to one reporter’s hair inquiry by asking if they’d all like to know about the hair issues of her fellow cosmonauts on the mission, who are all men.

A Business Insider article describes a Credit Suisse analysis showing that companies with a market cap greater than $10 billion which have at least one woman on their boards of directors outperformed those with no females by 26 percent over the six years leading up to 2011.

The article quotes Credit Suisse analysts Julia Dawson, Richard Kersley and Stefano Natella as saying, “Importantly, this mix of companies would also have outperformed global equities as measured by MSCI’s ACWI,” indicating that this is a global phenomenon.

The article goes on to say, “From 2012 to June 2014, companies with at least one woman on the board have seen a 5 percent outperformance on a sector neutral basis.” Shared via @rosedefremery and @elenaholodny.

What stores are open on Thanksgiving Day...