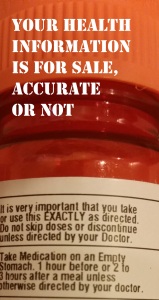 Data brokers selling your personal health information, some of which isn’t accurate

An article in @BloombergNews reports on the firms that collect our private health data and sell it to marketers. Lists include those who have problems with pain, depression, cancer, diabetes and many other medical conditions.

The collectors of consumer health data will sell it to almost anyone, with no concern to individual privacy. Moreover, the information isn’t always correct. One man interviewed for the article appears on a diabetes list, though he doesn’t have diabetes, nor does anyone in his family.

The companies use various sources, including surveys, registrations and summaries of retail purchases to determine that a person either has a condition or has an interest in it, meaning a loved one probably has it, or so the data miners surmise. Apparently, one of the most common ways to end up on a list is by filling out a health survey either by mail or online, often in exchange for a discount or sweepstakes entry.

Anyone signing up for something online and entering personal information may want to think twice about truthfully answering any personal health questions and should make sure to carefully read the privacy policy. Many folks understand that information they post on Twitter or Facebook may be viewed by others, but then think nothing of admitting in an online registration to a suspected Alzheimer’s disease diagnosis or a problem with erectile dysfunction.

Some fans of “Downton Abbey” may remember the hilarious “Breaking Abbey” spoof broadcast by Stephen Colbert a couple of years ago.

Now, George Clooney has reportedly filmed a sketch with “Downton Abbey” cast members. According to a @mashable article, Clooney will appear in a “Downton Abbey” sketch to raise money for charity. In the clip, Clooney appears as an American attending a wedding at the Grantham home. He won’t appear in any regular episodes, but, as Mashable notes, we’ll take what we can get.

The FTC announced in a press release that it had reached a settlement with HealthyLife Sciences, LLC, banning them from the weight loss supplement business due to their deceptive advertising.

The company promised its supplements would help people “get high school skinny” and sold them for up to $65 for a month’s supply online and at chain stores such as Walgreen’s, CVS and GNC. HealthyLife Sciences made claims that their Healthe Trim pills increased metabolism, burned fat and suppressed appetite.

“Losing weight is rarely easy, and it would be a miracle if a pill made it so,” said Jessica Rich, Director of the FTC’s Bureau of Consumer Protection. “Consumers should be skeptical when a product like this one claims to make weight loss easy.” Shared via @alisonannyoung.

Consumers see drugs as safer, more effective when compared with other drugs in TV ads

The Regulatory Affairs Professional Society reports on a study outlined in the journal Social Science & Medicine regarding comparative claims in drug advertisements.

FDA-sponsored studies compared the effectiveness of different types of direct-to-consumer prescription drug advertising. They found that video advertising comparing one drug with another does a better job at persuading consumers of a new drug’s safety and effectiveness than either print ads or video ads that don’t make comparisons. Shared via @AlecGaffney.

These Weird, Dangerous Diets Could Kill You...

Lose Weight Fast With These 14 Dukan...