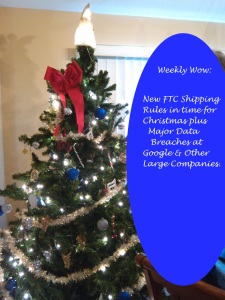 Under new FTC rules which take effect December 8, Internet retailers must ship your merchandise within a “reasonable timeframe” or within 30 days if they can’t give you a date. If they can’t meet that target, they must get your permission for additional time or provide an immediate refund.

An Engadget article about the rule change suggests holiday shoppers can breathe a bit easier with the rule change and mentions the “scores of gift givers whose packages arrived late last year.” With the new vendor requirements taking effect in early December and merchants still having 30 days to fulfill your order, the best strategy seems to be not waiting until the last minute to complete your shopping. If you did order early and shipment has been delayed, you may want to come up with a backup plan, like trying to get the item elsewhere and canceling the first order.

Google doesn’t seem terribly concerned about the disclosure of millions of Gmail passwords. Even if the passwords are old, many people keep using the same Google password for years and re-use the same passwords across multiple Web sites, against the advice of security experts.

Among the other data leaks:

In a defiant move against the fickle world of online reviews, a restaurant in California has begun encouraging customers to leave poor reviews on Yelp.

Yelp has denied that it tweaks reviews based on whether a business advertises on Yelp, though a court ruling said they legally could do so. A co-owner of the restaurant, Botto Bistro, feels that advertising with Yelp made a difference in which reviews the site displayed, and decided to fight back with the one-star campaign in hopes of getting removed from the site. The Italian restaurant’s mocking of Yelp hasn’t gotten it booted from the site, but it has generated nationwide attention with an article in USAToday.

According to the USAToday article, some customers have really jumped on board, such as one who posted, “”I have been here at least 20 times and it is still terrible.”