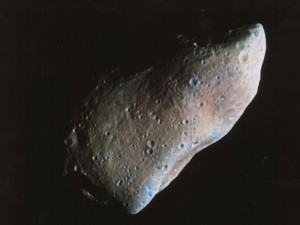 Phil Plait (@BadAstronomer) reports that the U.K.’s Telegraph ran an article claiming that an asteroid will hit the Earth a few centuries down the road in 2880. While the prospect of an asteroid smacking into our planet makes for a sensational, attention grabbing headline, Plait lays out a detailed description of why the article’s assertion rings false.

Plait also describes the “cool science” surrounding the asteroid in question, known as 1950 DA. As a “near earth” asteroid, 1950 DA sometimes passes close enough to the earth for scientists to get a good look at it, although it remains much further away from the Earth than our moon. Plait calls predicting an asteroid impact a “dicey proposition at best,” but notes that scientists have decades of observation to go on with 1950 DA (1950 being the year it was discovered). Based on these observations and various scientific measurements, experts place the probability of 1950 DA hitting earth in 2880 at one in 4000 – in other words, extremely unlikely.

Many people have heard of patent trolls – shell companies that go after tech startup companies, claiming to own patents and threatening legal action if the startups don’t fork over a large amount of dough. Some may find it looks very similar to extortion – a patent troll makes a financial demand that’s probably less than what the startup company would have to pay in legal fees to fight the claim, so businesses often pay the toll to the troll to make the problem go away.

@TeachingAway‘s article, shared by @mattcutts, describes a case in which law students worked to defeat a patent troll, largely by depriving it of its lifeblood. A patent troll counts on its adversary facing huge legal bills to fight a patent claim. When law students, working for free, remove attorney fees from the equation, a patent troll loses its advantage and, in this case, crumbled under the pressure. Some favorable and well-timed Supreme Court decisions seemed to have sealed their fate, along with the great work of law students, who now have some invaluable, practical experience under their belts.

A Whole Foods spokesman told Huffington Post that the grocer decided to offer rabbit meat for sale as a result of numerous customer requests. Critics have lashed @WholeFoods on Twitter, saying that they shouldn’t sell family pets as meat. Apparently, this concept only applies to cute and cuddly pets, not birds and fish. Outraged rabbit lovers have begun a Change.org petition seeking to stop Whole Foods’ peddling of bunny meat.

Numerous computers and other devices wide open to hackers

Forbes reports that security experts have warned for years about consumer devices that are visible on the Internet, but their screams have apparently fallen on deaf ears. Medical devices, security cameras, street lights, home monitoring systems, power plants and numerous other products are often wide open to potential hackers.

Plus, tens of thousands of computer users install remote access programs such as VNC, but fail to add password protection, leaving their computers wide open to any hacker with a port scanner and nefarious intentions. Shared via @ForbesTech.

Women tend to raise more money than men through crowdfunding

According to a Wall Street Journal article, women are significantly more likely to meet their goals on crowdfunding sites such as Kickstarter and Indiegogo. The article cites a study that shows that overall, “women are 13 percent more likely than men to meet their Kickstarter goals, even after controlling for project type, amount being raised and other factors, according to the analysis, which examined 1,250 projects in five categories that sought at least $5,000 between 2010 and 2012.”

On Kickstarter, though women-led companies account for less than 10 percent of tech projects, roughly two-thirds of their endeavors meet their fundraising goals. Just 30 percent of tech ventures with male founders do the same. Shared via @ColleenToumayan and @deborahgage.