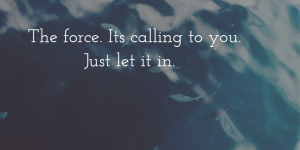 Spoiler Alert: Read no further if you haven’t seen “Star Wars: The Force Awakens” and plan to see it. This post discusses scenes and situations in the movie and gives away plot points.

I’m a huge Star Wars fan, having seen the original trilogy movies in theaters multiple times as a kid. As you’ve probably heard from others by now, “Star Wars: The Force Awakens” brings back some of the magic of those original films. It continues the story arc of the main characters while handing off the baton to a number of superb newcomers.

Here are 10 things that came to my mind after seeing “Star Wars: The Force Awakens” in a theater the other day. 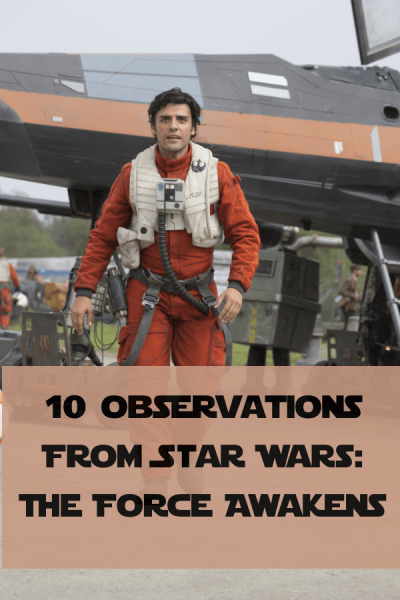 Women Hold It All Together

Around 30 years following the events of “Return of the Jedi,” the remnants of the evil empire have morphed into the evil First Order. What used to be the Rebel Alliance is now the Resistance, led by the former Princess Leia, now General Organa.

At some point, Han and Leia’s grown son turned into a psychopath and wannabe Sith lord, and Han Solo flew the coop, returning to swindling and smuggling. Luke Skywalker has also deserted his twin sister, apparently because he felt guilty and despondent over his trainee – Han and Leia’s son, Ben – turning to the dark side of the force.

Leia is left holding the proverbial bag, leading the Resistance at great personal sacrifice and without the two men who supposedly love her. Luke’s desertion not only causes tremendous grief for his twin, but also wreaks massive death and destruction as the First Order tries to find and kill the last known Jedi. 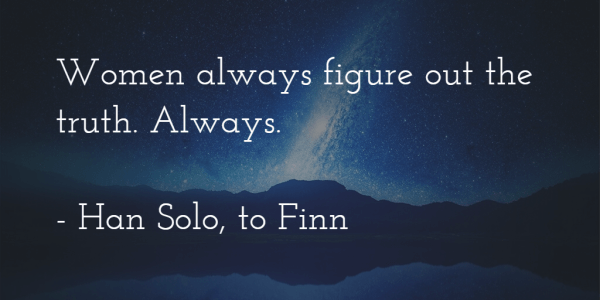 Even the brave stormtrooper deserter Finn tries to run away from the fight so he can hide somewhere. No matter how much Rey wants to return to her home (such as it is) on Jakku, she won’t abandon their mission of returning the BB-8 droid to the Resistance.

Plus, Rey really kicks butt on numerous occasions. She’s apparently taken care of herself since she was a small child, and it shows.

It becomes obvious pretty quickly in “Star Wars: The Force Awakens” that stormtroopers aren’t clones anymore. We see an unmasked stormtrooper for the first time, and he’s not a white guy. Then, we hear the voice of one of his boss stormtroopers, Captain Phasma, and she’s not a guy at all.

Later, a character from the First Order laments briefly that maybe they should have used clones, and Finn describes how he was taken away from his parents at such a young age that he doesn’t remember them.

Even if Finn doesn’t turn out to have an additional backstory, his character development so far has been outstanding, and John Boyega’s acting is magnificent. Remember when his friend falls and he’s unable to participate in a massacre of innocent civilians? He makes Finn’s emotions and internal conflicts obvious even though Finn is still wearing a stormtrooper mask! 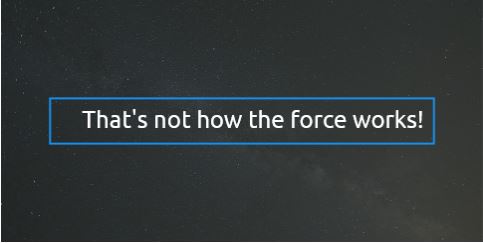 I wonder how much Mark Hamill got paid for his 30 seconds or so of screen time in “Star Wars: The Force Awakens.” Maybe he was there for a minute or a bit more if you count the time you saw his back as Rey approached him.

Nobody completely explains why Luke abandons his duties and goes into hiding other than the implication that he’s upset about the way his protogee turned out. I guess that’s what happened to Ben Kenobi, too, sort of, but Obi-Wan was also doing a job – watching over the young Luke as he grew up.

No Need for Lucas

George Lucas’s only screen credits are for “based on characters created by,” and that’s a good thing. He wrote the prequels on his own, with their boring characters, stilted dialog and lack of any chemistry between any of the characters.

Lawrence Kasdan, who co-wrote “The Empire Strikes Back” and “Return of the Jedi,” is back to co-write “Star Wars: The Force Awakens.” That may be why this movie is so much better in every way than Episodes 1 – 3.

Disney Expects Lots of Kids to See It

For a PG-13 movie, “Star Wars: The Force Awakens” sure must expect a lot of young viewers. When I saw it, of the 8 or 10 previews that ran before the movie, only two were for movies that aren’t aimed at kids.

I saw previews for upcoming movies about Angry Birds, The Secret Life of Pets (animated), a live action version of “The Jungle Book,” a life action “Teenage Mutant Ninja Turtles” movie and a number of other films geared toward kids. 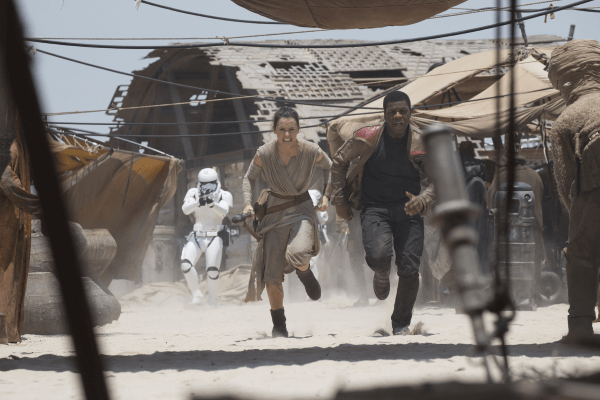 New Characters Can Take It From Here

Rey, with her still-unknown back story, is obviously the Star Wars hero of the upcoming films. Most people seem to assume that she’s a long-lost child of either Leia or Luke, but she also seems young enough to be a grandchild of one of the other Jedi who were exterminated during the events of “Revenge of the Sith.”

She could also descend from Ben Kenobi. We assume he was alone all that time on Tatooine, but he may have enjoyed some female companionship at some point.

Among the still unanswered questions is where did this apparent Sith lord equivalent Snoke come from? Why are there no other Jedi after all this time? If the Knights of Ren killed them all, where are all these knights now? 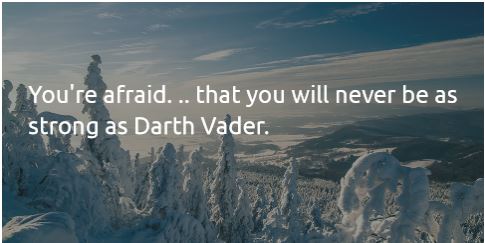 Kylo Ren may look and sound scary in his spooky dark mask and cape, but Vader he is not. Remember how calmly Vader killed people with his force choking, saying things like, “Apology accepted, Captain Needa.”

Even when Vader was really angry, he simply stalked away with the dark imperial music score playing. And, despite his stellar acting performance, Adam Driver is unlikely to channel James Earl Jones successfully.

Kylo Ren, however, acts a lot like Anakin Skywalker, Vader’s alter ego from before he became a calm, controlled evil-doer. According to the prequels, Anakin is a whiny brat who somehow transforms into the menacing Darth Vader, who remains cool and collected even when he strangles someone with the force.

Kylo Ren loses his temper and destroys stuff, something I can totally see Anakin Skywalker doing pre-Vader. Plus, it appears he killed all of Luke’s other Jedi apprentices. This seems odd since he couldn’t even defeat an untrained young scavenger in a light saber duel. 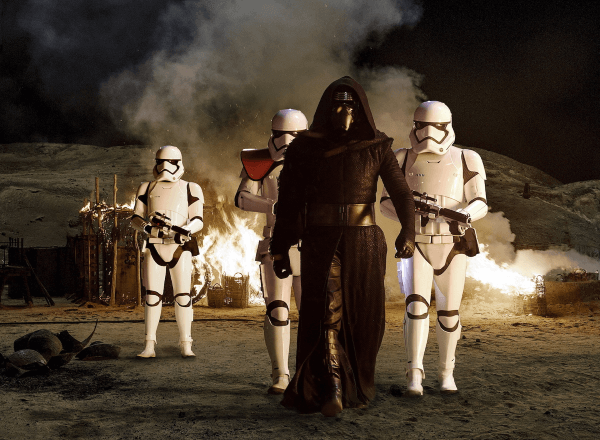 Rey kicked Ren’s butt and left him to die as the Starkiller planet collapsed around him, but somehow, someone had to have rescued him. The sequels will need a villain, right?

And, that’s what happened to Grandpa Vader – Obi-Wan Kenobi left him to die on on a fiery volcano planet after chopping off some of his body parts in a light saber duel. But someone managed to rescue him and put him back together like the Six Million Dollar Man.

Also, I wouldn’t rule out anyone returning from the (apparent) dead in the Star Wars universe. That’s assuming the actor is still alive, though they could probably manage to ressurect Sir Alec Guiness using old footage if they really wanted to.

The Swashbuckling Is Back

As in the original Star Wars trilogy, the characters in “Star Wars: The Force Awakens” sizzle with emotion, excitement and charisma. Viewers instantly connect with them and care about them.

One of my many beefs with the Star Wars prequels was the complete lack of chemistry between Anakin and Padme. Finn and Rey may not have a romance going at this point, but their friendship shows vastly more passion and enthusiasm than we saw with Anakin and Padme, not to mention better acting and dialog by far.

Here’s Hoping Poe Has a Bigger Role in the Sequels

So there’s this cute and funny guy on the screen, and he’s only there long enough to get captured and tortured, then make an exciting getaway from the First Order. Later, we see him for a short time in the movie’s climactic space battle.

I realize there wasn’t much room in the storyline for the Resistance’s star pilot (as General Organa describes him). Perhaps subsequent Star Wars films will make some space for this new character and give him some sort of intriguing back story.

If you’re interested in a great play by play of the entire “Star Wars: The Force Awakens” movie, see this great post from Mashable.

What did you think of the new Star Wars movie? Most people rank it far above the prequels, and some even say it’s better than some of the original three Star Wars flicks.