New Posts
Eat This Instead of That
How to Remove Scratches from Sunglasses
Look for These Changes When You Visit a...
Easy and Delicious Banana Bread Recipe
Scrumptious Easy Chicken Pot Pie Recipe
5 Things I Wish I Knew Before I...
10 Favorite Hamilton Quotes to Make You Smile
6 Amazing Self-Help Books to Read Now
What You’re Giving Away in Those Social Media...
What’s That Your Ancestor Died From?
How-ToTechnology

Must Have Best Free Software For Your Computer 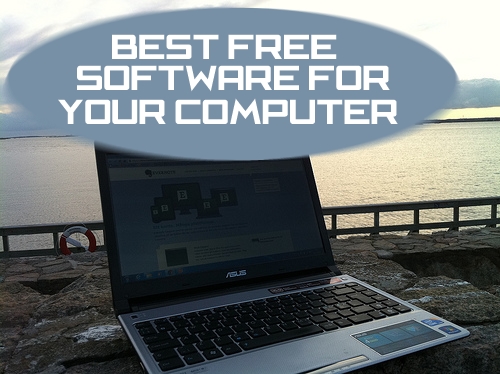 Many of the best software applications are free, sometimes with paid options for premium levels of service.

Sometimes, though, even reputable companies include unwanted and sometimes problematic add-ons with their free software installs and/or updates. For example, Java includes the annoying Ask Toolbar with updates for users who aren’t paying close enough attention to uncheck the box allowing it to install. Similarly, Adobe started including a McAfee system scan app with installs and updates of its free Adobe Reader software.

Both Java and Adobe Reader are present on a huge majority of Windows computers and auto-update themselves by default. Adobe Reader is the most popular app for viewing PDFs, and many programs and Web sites require Java to work.

Fortunately, a fantastic website, Ninite, lets you install and update nearly all of the most popular free software programs without any unwanted add-ons. You simply choose which free software you want to install or update, then download one executable file which you can run to take care of everything. Among the site’s extensive list of programs, here are the ones I recommend selecting.

Java, as previously mentioned, is required by many Web sites and software programs. It might already be on your computer, but if not, you should have it.

FoxitReader is my preferred PDF viewer. It launches more quickly than the more popular Adobe Reader and doesn’t seem to have as many security issues.

VLC Media Player is a more robust and versatile media player than the Windows Media Player that most Windows computers already have. You can use it to listen to MP3, WAV, WMV and other sound files and also to watch videos and DVDs.

Evernote is the gold standard for note taking software. You can store all sorts of notes, Web clippings, pictures, documents and PDFs in Evernote and access them using a Web browser or through free Evernote apps available for Windows, Android and iOS.

Dropbox offers free cloud storage space and automatic upload of camera and tablet photos to the cloud. You can install the free Dropbox app on your tablet, smartphone and computer and access photos, videos, documents or any type of file stored in your Dropbox from where ever you might need it. You can also share Dropbox folders with other Dropbox users. Google Drive offers the same type of services and is also available through Ninite, so you can use install either one of these great cloud services or both.

Chrome has quickly become one of the most popular Internet browsers for Windows, giving Firefox and Internet Explorer a run for their money. Chrome offers zippy performance along with a large selection of helpful add-ons. Plus, if you login to Chrome with your Google account, you can access your bookmarks across all of your devices – tablets, smartphones, computers – which have Chrome installed. Your add-ons also synchronize across your Windows computers.

Paint.NET offers an extremely easy graphics editing program with more powerful features than Windows’ built-in Paint program while remaining much more user friendly than something like Photoshop. Paint.NET is my go-to program for graphics editing.

GIMP is a free software option you might want to consider as a substitute for the very costly Adobe Photoshop. My 10-year-old uses both Paint.NET and GIMP frequently for drawing and editing images.

IrfanView is a graphics viewing, editing and scanning software that gives you the option to save a JPG or other graphics file as a PDF, and vice versa, which can really come in handy sometimes.

CutePDF lets you create a PDF easily from a Word document, Excel spreadsheet or pretty much any other type of document. CutePDF is handy to have even if you have other ways of creating PDFs, such as MS Office 2007 or later or Adobe Acrobat Standard or Professional. CutePDF sometimes does a better job than MS Office or Acrobat of creating PDFs that anyone can open on any computer and which look exactly like the original document.

OpenOffice is a great free substitute for Microsoft Office for creating and editing documents and spreadsheets. I use a combination of OpenOffice and Google Docs at home, where I do not have Microsoft Office installed on my computer. While OpenOffice works pretty well for most people, it is not exactly the same as Microsoft Office as some online articles claim. It can open documents saved in the .docx format but can’t re-save them in that format. Also, the occasional document might not look the same when opened in OpenOffice as it does in MS Word. 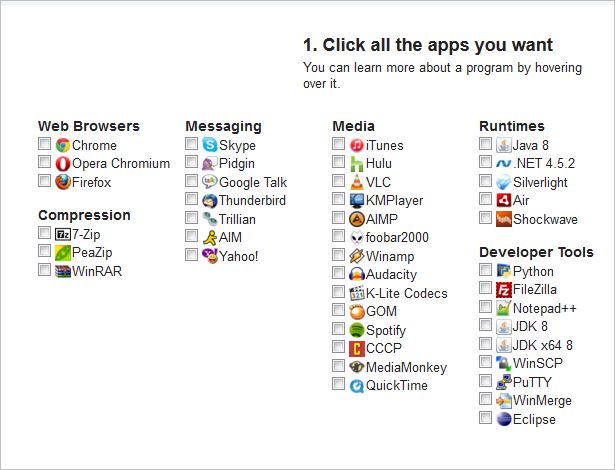 You might also want to consider installing Silverlight and Shockwave, which some websites require in order to load correctly. You can get free software to protect against malware, too, such as Microsoft Security Essentials. MSE isn’t as powerful or highly rated as antivirus software you have to pay for, but it also doesn’t slow down your computer like those other programs tend to do.

If you want a free ZIP program, include 7Zip in your choices. Windows includes basic ZIP capabilities, but 7Zip offers some additional functions and is very easy to use.

Grab Thunderbird if you need an email program and don’t have or want to use Outlook.

Gadwin Print Screen isn’t included with Ninite, but it’s worth downloading. It gives you more powerful options for taking screen shots than what Windows has built-in, plus you can use it to program your PrintScreen button to send a screenshot to your printer. At last check, Gadwin Print Screen software doesn’t come with any unwanted add-ons.

You can’t get Windows Essentials 2012 from Ninite, either, but it’s worth seeking out on its own. When installing, choose the option for Movie Maker, and pick Family Safety if you have kids whose computer activities you want to monitor and/or restrict. Family Safety requires Windows 7 or above.