New Posts
Look for These Changes When You Visit a...
Easy and Delicious Banana Bread Recipe
Scrumptious Easy Chicken Pot Pie Recipe
5 Things I Wish I Knew Before I...
10 Favorite Hamilton Quotes to Make You Smile
6 Amazing Self-Help Books to Read Now
What You’re Giving Away in Those Social Media...
What’s That Your Ancestor Died From?
LWB Most Popular Posts of 2019
Amazon Echo Auto Review: Add Alexa to Your...
Bargains & FindsEntertainmentFamily & Kids

Our Trip to the NC Mountains and Tweetsie Railroad Amusement Park 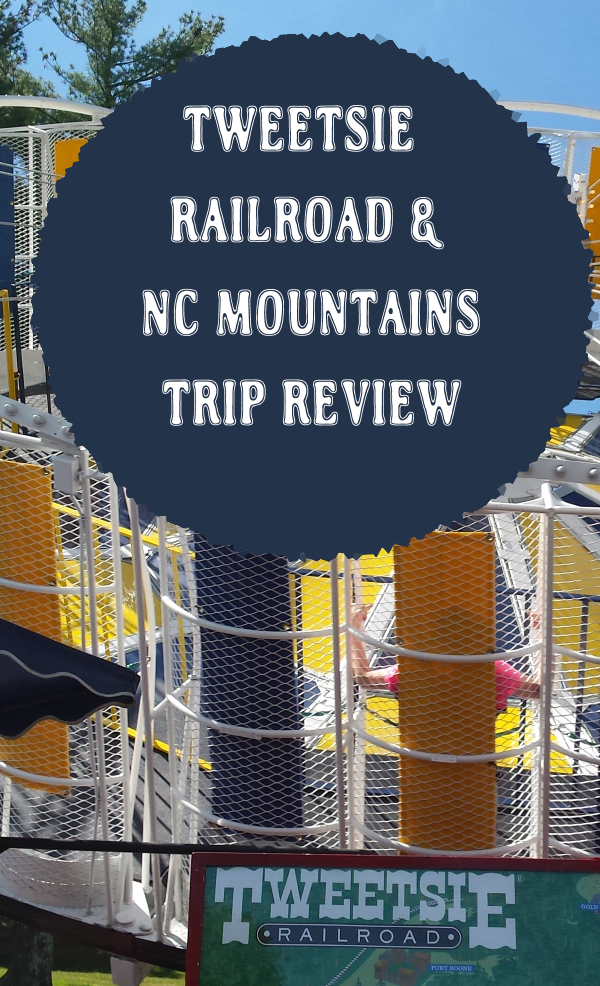 I recently took my two daughters on a brief jaunt to the mountains, staying in a luxurious house in the Blue Ridge Mountains of North Carolina and visiting Tweetsie Railroad amusement park for the first time. 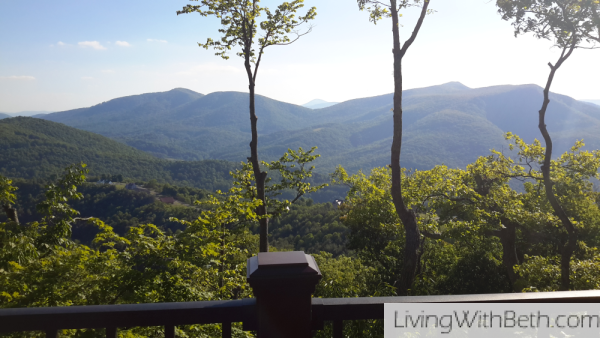 View from the mountain house we stayed in.

This was my first time in West Jefferson, NC, and I can’t imagine finding a nicer house with a better view. Plus, we all looked forward to visiting Tweetsie Railroad for the first time. I’d heard about Tweetsie for many years, with some people saying it’s much better than Disneyworld.

That wouldn’t be much of a stretch for me, since my one and only Disney visit from many years ago doesn’t conjure good memories. At home, it was early spring, but in Florida, we suffered through sweltering heat.

At Disney, we spent 90 percent of our time waiting in line or walking around. We probably went on four or five rides total. It was an extremely expensive, major letdown for me. 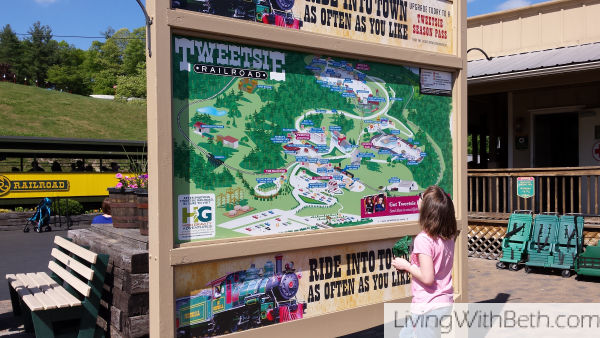 I certainly enjoyed Tweetsie a whole lot more than Disneyworld. We spent around six or seven hours at Tweetsie and went on numerous rides. We only waited in long lines twice – once for the Turnpike Cars and once for the chair lifts up the mountain. 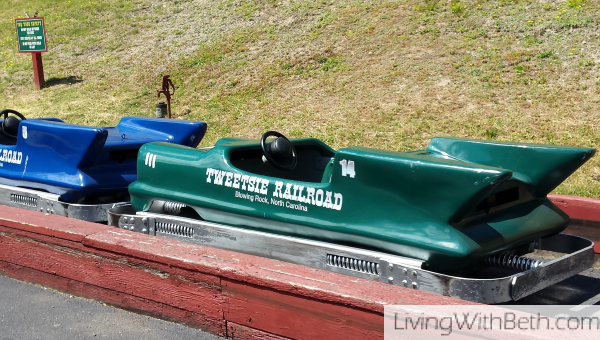 My older daughter (age 11) went on her favorite ride, the Tweetsie Twister, four times, three of them right in a row. She went on another ride twice in a row.

There are some attractions which cost extra, such as face painting. I paid $5 for my five-year-old to have a cat painted on her face. There’s also an arcade with video games, a petting zoo, where you can pay $1 to buy food to give to the animals, and gem mining, which costs $9. 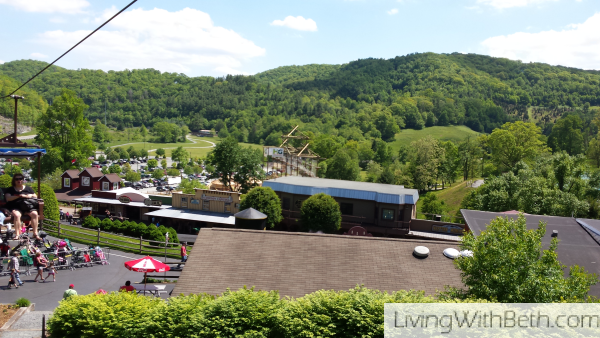 Of course, Tweetsie also offers a selection of gift shops selling souvenirs, including pink cowgirl hats and plastic Tweetsie mining hats in a variety of colors. Every interaction we had with a Tweetsie employee was pleasant. The weather was perfect – sunny and pushing 80 degrees toward late afternoon, which is pretty warm for the NC mountains. 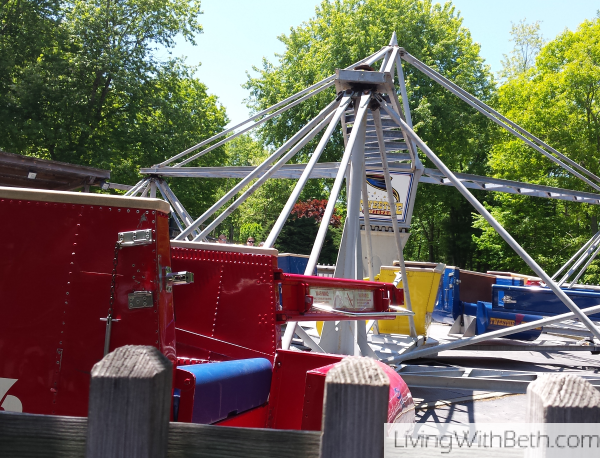 Tweetsie also offers plenty of places for the family to stop for photo opportunities, including cement horses and buggies. The park features all the popular amusement park rides, including the Tilt-a-Whirl, Ferris Wheel, airplanes, Merry-Go-Round and many more. 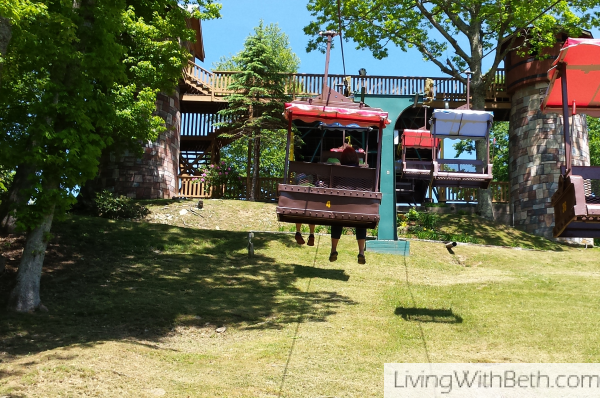 The chair lifts are like ski lifts that take you on a relaxing and scenic ride up the mountain where more rides, restaurants and attractions await. Take the chair lifts back down whenever you’re ready.

Leashed pets are allowed in certain areas of Tweetsie Railroad, excluding the rides, chair lifts, train and petting zoo. Alcoholic beverages are not sold or permitted at Tweetsie.

The food costs about what you’d expect at a family attraction – $3 for a good-sized bottle of water, $17 for a pepperoni pizza and $5.95 for a barbecue sandwich. Food stands and restrooms are plentiful and conveniently located.

The pizza and barbecue actually tasted quite good. They didn’t seem like pre-fab, frozen foods that someone threw in an oven.

The single bad thing about the food was that the only place we could find to sit down and eat lunch turned out to be the designated smoking section. I don’t have anything against smokers, but if Tweetsie must allow smoking on premises, I wish they wouldn’t have the smoking section where families are eating their lunch.

To be clear, nobody was eating and smoking, like with the smoking section of a restaurant. Families with kids were eating, and grown-ups were stopping by in droves to light up. That was their right, as it was a designated section for smoking, but it’s bad form for Tweetsie to combine family eating space with the smoking area. That was really the only drawback to Tweetsie, and something you can avoid if you watch carefully where you sit down to eat. 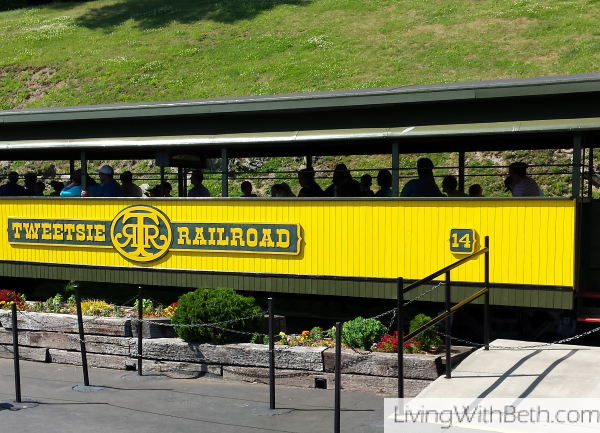 One of my five-year-old’s favorite things was the generously long (three-mile) ride on a historic steam locomotive. The train ride included a couple of exciting stops to watch cowboys and Indians squabble with each other. One cowboy strolled the train cars, shaking hands and talking with passengers.

The park itself isn’t overly large and spread out, so you don’t end the day feeling like you ran a marathon. It’s just the right size for your family to ride all of their favorite rides – multiple times, if desired – grab some tasty food and see the attractions, all in one day, without missing anything. The kids will definitely want to come back again sometime, too.

Founded in 1957, Tweetsie Railroad offers a fun time for the whole family at a reasonable price. I wholeheartedly recommend Tweetsie and the mountain house we stayed in.

Have you ever been to Tweetsie Railroad? Where do you plan to take your family this summer?

Read more of my travel related posts at this link.

Shutterfly coupon code – get a free...