New Posts
Look for These Changes When You Visit a...
Easy and Delicious Banana Bread Recipe
Scrumptious Easy Chicken Pot Pie Recipe
5 Things I Wish I Knew Before I...
10 Favorite Hamilton Quotes to Make You Smile
6 Amazing Self-Help Books to Read Now
What You’re Giving Away in Those Social Media...
What’s That Your Ancestor Died From?
LWB Most Popular Posts of 2019
Amazon Echo Auto Review: Add Alexa to Your...
Gift IdeasTechnology 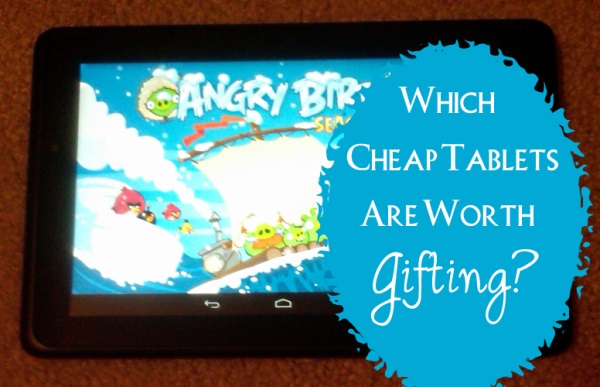 Ultra cheap tablets like the $49.99 Android CMP776 tablet deal from the recent Office Depot Black Friday ad come around once in awhile to temp buyers. However, this holiday season’s tablet market includes numerous cheap tablets commonly priced between $90 and $140 that should work well not only for reading ebooks but also browsing Web sites, playing games, typing emails and many other tasks. A lower end tablet will likely sport a 6″ or 7″ display, rather than a 9″ or 10″ one, but many offer a current version of the Android operating system and include cameras and 8 GB of onboard memory, plus the ability to add a microSD card for extra storage.

While you may get a camera with a cheap tablet, it likely won’t be a nice one with a flash or other extras, though it’ll probably fit the bill for taking outdoor shots in nice weather or indoor snapshots that don’t require exceptional quality. A few years ago, a cheap tablet wouldn’t have been good for much other than reading ebooks and very light Android app usage. As the Android tablet market has matured and more players have entered the tablet game, competition has intensified, turning many low-cost tablets into nice choices for many people as well as hot Christmas gifts. Here are a few choices for cheap tablets that are worth gifting.

weighs about 11 ounces and offers a 2 MP rear-facing camera, 8 GB of memory and the Android 4.2 Jelly Bean operating system along with a maximum 32 GB microSD card slot. The Samsung Galaxy Tab 3 Lite costs $134.67 from Amazon and comes with 50 GB of free Dropbox space, too.

Bump up to the Samsung Galaxy Tab 4

7″ tablet for $149.99 and you’ll get a somewhat faster processor than the Galaxy Tab 3 Lite (1.2 GHz quad-core rather than dual-core), 1.5 GB of RAM instead of 1 GB and the current operating system version – Android 4.4 KitKat. Weighing 9.6 ounces, the Galaxy Tab 4 has 8 GB of onboard storage like its cousin along with a 32 GB maximum microSD card slot.

The Galaxy Tab 4 also offers an IR blaster for using it as a remote control and multi-user mode for sharing the tablet with other family members, plus a kids mode for a child-friendly interface. The tablet has both 3 MP rear-facing and 1.3 MP front-facing cameras for photos, selfies and video chat. The Galaxy Tab 4’s multi-window feature means you can place two apps side-by-side and drag content between the two. It also comes with three months of SiriusXM Internet Radio and 50 GB of free Dropbox space.

(model number PDA0MU-001005) tablet has 8 GB of onboard storage like many current cheap tablets, along with Android 4.4 KitKat, and weighs about 12 ounces. Its microSD card slot accepts up to a 128 GB card, and the tablet offers support for Bluetooth but has a low-end front camera (no rear-facing one).

Verizon Wireless released their house brand tablet line late last year in time for Christmas and now sells the tablet for as low as $0.01 with two-year mobile contract

. It’s likely the least expensive choice for those who want an always-on mobile Internet connection.
.

You could choose an Amazon Kindle Fire HD 6

, with its 6″ HD display, for as low as $99 for the version with 8 GB of onboard storage. Kindle Fire tablets offer great parental controls and certain built-in perks such as free unlimited Amazon Cloud storage for any photos you take with the Kindle Fire’s front and rear facing cameras. If you’d like to get a Kindle Fire HD tablet for a special someone’s Christmas present, you should act quickly. Amazon shows a one to two week delay in shipping these babies.

, with a 7″ display, starts at $139 for the version with special offers and 8 GB of onboard storage. It also offers front and rear cameras plus unlimited Amazon Cloud Drive

storage space for any photos you take with the tablet.

Amazon Kindle Fire tablets have some drawbacks, such as the lack of microSD card slots for optional added storage (something iPads also lack). You can, however, pay more for a version with 16 rather than 8 GB of memory. In addition, Fire tablets don’t work with Google Play for downloading Android apps like other Android tablets. You’re limited to Amazon’s app store, which isn’t much of an inconvenience since it has almost anything you could want for the tablet with its huge selection of both free and paid apps. The Fire HD 7 comes in an array of cute colors other than black, too.

I’ve had only positive experiences with Amazon Fire and Samsung tablets, but have had quite the opposite experience with off-brand tablets. I’m not saying they can’t work for some purposes. I used a Pandigital Novel tablet for a few months. It ran an early version of Android but was marketed as an e-reader. It did an okay job as an e-reader, but I ended up wanting more from it than it was willing to give – specifically, the ability to smoothly run other Android apps.

The Pandigital also had frequent problems with Wi-Fi connectivity. Another cheap tablet I purchased later from an unfamiliar brand ended up going back to the store because it couldn’t maintain a Wi-Fi connection at all. Whatever tablet you select, I recommend reading the reviews on Amazon.com before purchasing, so you can get a feel for what other folks like and dislike about it.

LivingWithBeth favorite things of 2014: Buy a gift your loved one will adore