New Posts
Eat This Instead of That
How to Remove Scratches from Sunglasses
Look for These Changes When You Visit a...
Easy and Delicious Banana Bread Recipe
Scrumptious Easy Chicken Pot Pie Recipe
5 Things I Wish I Knew Before I...
10 Favorite Hamilton Quotes to Make You Smile
6 Amazing Self-Help Books to Read Now
What You’re Giving Away in Those Social Media...
What’s That Your Ancestor Died From?
Home & DIY 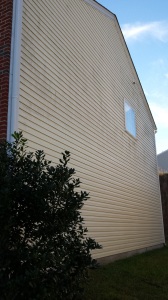 I knew that one side of my house needed power washed before I received the nasty gram from my homeowners’ association. It was actually just the top half of one side of the house, the one I couldn’t reach when I pressure washed the bottom half of it myself a few months ago.

The whole house received brand new vinyl siding in 2011 thanks to a tornado that tore through my neighborhood, and most of the house looked pretty good unless you got up close to it. I tried using Krud Kutter

a couple of times, and it just didn’t make much difference on the grime, mildew and dirt build-up.

Quotes from pressure washing companies for our house came to around $300. Now, I understand that companies have to make a profit and pay their employees and other expenses. I grew up with parents who own a business. However, $300 to power wash my house didn’t make financial sense when most of it (the front and the other side) were hardly dirty and nobody sees the back of the house, which I can power wash with my own small pressure washer

As I lamented the situation to my sister in a public place one day, a guy standing next to us suggested that I try Craigslist, Groupon and LivingSocial. I couldn’t believe I didn’t think of those options myself, given how much time I spend online already.

Checking Groupon and LivingSocial netted a few options, none of which looked very appealing. One had several negative, unresolved reports to the Better Business Bureau. None had any online presence or ratings history. Plus, their prices were so low that I couldn’t see how they’d do a good job. One offered a power wash for $89. Given that LivingSocial and Groupon keep half of the price you pay for a voucher, I had doubts about whether they would even accept my house or say that it was too large for their offer.

Also, I’d been burned by one of the social buying sites before on a service business when I tried to redeem a voucher and the business didn’t respond to my calls. In addition, I needed the work done quickly and couldn’t wait my turn in a long line of people who’d purchased cheap vouchers. Once businesses have your money from Groupon or LivingSocial, what small amount that it is, they can take their time in performing the service.

Next, I tried Craigslist and found only two people advertising pressure washing services. One seemed to be operating a real business but had no online presence at all. The other seemed to be a guy running a side business. Given my situation, I felt the side business guy was the best bet, so I contacted him.

I told him about the 1/2 of one side of the house needing special work and the rest of the front and the other side needing basically hosed down. He agreed to do it for $100. He told me later that the most he’d charge for a house my size would be about $200.

He came out to my house a couple of days later shortly after 5:00 p.m. and worked until past 7:00. He had to use a ladder to reach the really dirty section of my siding and hardly missed anything, even though it was raining and dark long before he finished. He spent considerable time on the white porch railing, which I totally did not expect.

The white plastic porch rails were also new from the 2011 tornado, but they became grungy quickly, and I couldn’t get them cleaned with my small power washer. I thought they were permanently stained. Seeing them white and sparkly again was an added bonus. He even followed up the next day to make sure I was happy with the job.

If anyone else is looking for a cheap power washer in Raleigh, I’d be happy to put you in touch with this guy, who set up the side business with a buddy to make some extra money.

If you want to stick with established companies with insurance and pretty Web sites, that’s certainly understandable. You might also want to hire such a company if you need to use plastic, since my Craigslist guy, not surprisingly, doesn’t accept credit cards. He would have preferred cash but accepted my check.

People commonly make the mistake with service businesses of paying upfront, before project completion. For a job requiring no materials and costing only a few hundred dollars, I would never pay in advance. No finish, no pay. Given that it was dark when the power washer finished, I couldn’t tell for sure what kind of job he’d done, but he’d worked for over two hours. Because of the porch light, I could see the newly clean porch rails and the front part of the house and figured (correctly) that his work was acceptable.

5 Crafty DIY Projects You Need to...