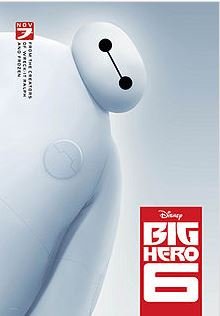 Based on a title from the Marvel Comics collection, which Disney acquired in 2009, the “Big Hero 6” movie follows boy genius Hiro Hamada and his friends as they investigate a criminal plot.

Having graduated from high school at 13, the now 14-year-old Hiro Hamada (voiced by Ryan Potter) spends his time refining his battle bots and hustling other battle bot owners for cash and fun in the futuristic metropolis of San Fransokyo. His brother Tadashi shows up just in the nick of time to rescue Hiro from a sticky situation, but they both ended up arrested in a police raid and bailed out by their guardian, Aunt Cass.

One of the things that seems to seal the deal is Tadashi’s special project, a large, puffy robotic “health companion” named Baymax (Scott Adsit). Hiro then starts working on a technical project impressive enough to win a spot at to the school.

His submission, tiny robots that band together to form just about anything and work by thought process commands from a headband, wows the admissions crew. However, an explosion and fire destroy the “micro bots” shortly after Hiro’s presentation. The fire also kills Tadashi after he goes back into the building in a futile attempt to rescue a favorite professor (James Cromwell).

Despondent over the loss of his older brother, Hiro can’t bring himself to leave his room until he accidentally discovers that his brother’s pet project lives on.

With Baymax’s help, Hiro discovers that his micro bots didn’t perish in the explosion, but that a super villain now has them, controlling the bots from his eerie mask. Baymax considers Hiro his patient, attempting to help him recover from his grief, and contacts Tadashi’s friends to enlist their aid.

Attempting to find out what really happened when the school building caught fire and exploded, Hiro and his new friends transform themselves into a group of super heroes. Hiro also alters Baymax’s appearance and programming to make him more helpful in the group’s crime fighting pursuits.

My kids, ages 10 and 4, remained riveted throughout the advance screening of “Big Hero 6.” The movie featured fantastic 3D effects and such realistic animation that we almost felt like we were part of the action. The movie’s dialog was, at various times, funny, touching and profound.

The heartwarming effort of a sibling to keep his brother alive through his life’s work reminds me a lot of “Frozen” with its younger sister willing to sacrifice everything to help her big sis. The characters in “Big Hero 6” don’t sing, but the movie does feature some catchy tunes, such as “Immortals

” by Fall Out Boy. Instead of Olaf the snowman, you have the white, puffy Baymax, a lovable robot who likes to comfort people with hugs.

“Big Hero 6” is as entertaining as “Frozen” without any queens or princesses and shows how a group of very smart, quirky people can band together to accomplish great things.

The heroic characters of “Big Hero 6” aren’t terribly good looking or sophisticated. They’re brainy and proud of it, creating a powerful message for kids that you don’t need special powers or a handsome face to succeed. Brains will do the trick quite nicely.

Big Hero 6 Review Parent Information (Rated PG) – I don’t recall any curse words in the movie. It doesn’t contain any sex or romance and certainly no nudity. The closest it comes to an adult theme is a brief mention of puberty. There’s quite a bit of cartoon action and violence that might scare or upset very young or sensitive children. Characters die (such as Hiro’s brother) after the audience has had time to get attached to them, but there are no scenes of death, blood or gore. It has some plot twists that may be hard for very young kids to follow, but they will remain entertained.