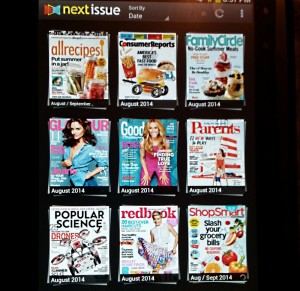 Update! Be sure to check out my new Next Issue review here.

Next Issue recently killed readers’ ability to use its phone or tablet app to access a single magazine subscription digital edition, leaving only its monthly all-you-can-read subscription model for using its digital magazine app.

The company’s unlimited access plans cost $10 or $15 per month, with the lower tier consisting of monthly periodicals and the “premium” plan including both monthly and weekly periodicals. Is Next Issue worth it?

On the plus side, if you enjoy reading magazines, you’ll love Next Issue’s selection of over 100 publications. Their monthlies include Consumer Reports, Glamour, Cosmopolitan, National Geographic, Car and Driver, GQ, Good Housekeeping, Men’s Health, Ladies’ Home Journal, Money, Fortune and Prevention.

Weekly periodicals include popular stalwarts such as People, Time, Newsweek and Us. If you typically buy several magazines a month or subscribe to a few of them, Next Issue may seem like a bargain, letting you keep all of your magazines on your tablet for anytime reading.

It Next Issue worth the money for a monthly subscription? The service and its Next Issue digital magazine app come with a number of caveats that you should consider before subscribing.

Also, keep in mind that unless you cancel your subscription, Next Issue will begin charging your credit card as soon as your trial period ends.