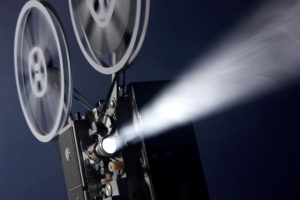 Back when I was younger, I had time to enjoy movies on a somewhat regular basis. Nowadays, I’m rarely able to watch movies, except for the occasional kids’ film. There are some movies I couldn’t wait to share with my kids, and some non-family films that I could still watch anytime if I had some free moments.

I’ve cheated a bit on this top 10 list by bunching together related movies. How about you? What are your favorite go-to films that you could watch anytime? 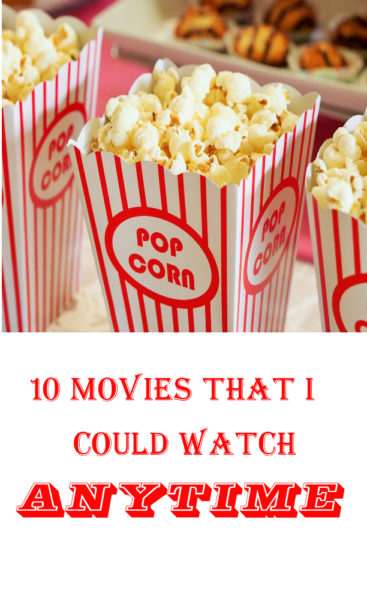 Star Wars (A New Hope), The Empire Strikes Back, Return of the Jedi

The original three Star Wars films top my list of movies I could watch anytime. I was excited about sharing them with my daughter, who also became a fan.

Lord of the Rings: Return of the King

My sister and brother-in-law convinced me to watch “Lord of the Rings: The Fellowship of the Ring,” which I didn’t think I’d like. I ended up loving all three “Lord of the Rings” movies, especially the third, “Return of the King.” In it, Frodo and Sam finish their quest to destroy the ring, while Aragorn fights to help Frodo and Sam, then to fulfill his destiny as the true king of Gondor.

My favorite parts come back to back in the film. First, Aragorn jumps off a ship with his ghost army to save the day.

Then, we see the Witch King grab Eowyn by the throat and say, “You fool. No man can kill me. Die now.” The Witch King releases her when Merry stabs him from behind. Eowyn then pulls off her helm, says “I am no man,” and stabs the Witch King, causing him to implode. The “Lord of the Rings” movies are rated PG-13 and not appropriate for young kids due to intense fantasy violence.

“Homeward Bound” tells the story of two dogs and a cat (voiced by Don Ameche, Sally Field and Michael J. Fox) who travel a long distance trying to find their way home to their people, two boys and a girl. I still cry at the end when the three pets reunite with their little humans. “Homeward Bound” is rated G and appropriate for all ages.

A beautiful woman is being forced to marry an evil prince. She loves a poor farmboy turned infamous pirate. Can Buttercup’s true love save her from a terrible fate?

“The Princess Bride” stars Robin Wright, Cary Elwes, Mandy Patinkin and Andre the Giant, with a small but memorable role played by Billy Crystal. The movie offers a rollicking good time with some mildly upsetting parts that parents might find inappropriate for younger children.

Famous line: “Hello, my name is Inigo Montoya. You killed my father. Prepare to die!”

“Shrek” is a great movie, but “Shrek 2” is even better. Newlyweds Shrek (Mike Myers) and Fiona travel to visit Fiona’s non-ogre parents, a king (John Cleese) and queen. There, a fairy godmother with ulterior motives tries to convince Shrek and Fiona that they’re wrong for each other, that Shrek should go back to his swamp and leave Fiona where she belongs, in human form, as a beautiful princess.

“Shrek 2” has one of the best endings I’ve seen in an animated film, with “Holding Out For a Hero” playing as Shrek races to get back to his wife Fiona and rescue her from the evil fairy godmother’s nefarious plans. The movie is rated PG, but it should be appropriate for most kids.

The Adventures of Robin Hood

“The Adventures of Robin Hood” starring Erroll Flynn was made many decades before I was born, but has been a favorite of mine since childhood. Nobody plays Robin Hood like Erroll Flynn.

Flynn plays the legendary bandit of Sherwood Forest, who romances Maid Marion while fighting the evil Prince John and Sheriff of Nottingham. The movie offers a fun, swashbuckling adventure for all ages.

The Harry Potter movies are fantastic in general, but I do have my favorites – the 1st, second, third and final installments (two movies, actually). The Harry Potter movies do an amazing job of adapting the books for the big screen without leaving out anything important. The first three are probably okay for all but very young kids, but after that, the films trend darker and more scary.

A rated R film and NSFK, Mel Brooks’ classic “Blazing Saddles” is one of the most hysterically funny movies I’ve ever seen. The sanitized TV version really doesn’t hold a candle to the original cut.

Cleavon Little stars as a black sheriff in the old West sent to a backward, racist town, where he teams up with a washed up gunfighter, The Waco Kid (Gene Wilder).

After seeing “Blazing Saddles,” you’ll understand catch phrases like “Badges? We don’t need no stinking badges” and “Excuse me while I whip this out.”

The music! The dancing! John Travolta and Olivia Newton-John! I tried to watch the live “Grease” revival on TV, and couldn’t even sit through 10 minutes of it. You just can’t mess with perfection, and nothing can match the 1970s movie version of “Grease.”

Set during the 1950s, “Grease” has greaser Danny and good-girl Sandy fall in love and try to be more like each other. It was rated PG for some adult themes that may not be appropriate for younger kids.

Singing in the Rain

You’ve probably at least seen clips of Gene Kelly’s iconic “Singing in the Rain” song and dance routine, but have you watched the whole movie? It features a number of memorable songs and phenomenal dance routines.

The movie takes place in the age when silent films start to give way to “talkies.” Kelly portrays a popular actor paired with a beautiful but squeaky voiced and ditzy costar. He falls in love with the woman chosen to dub his costar’s voice in their first talking picture. I can’t think of anything in the movie that parents might find objectionable for kids.

LivingWithBeth’s Most Popular Posts of 2016