New Posts
How to Remove Scratches from Sunglasses
Look for These Changes When You Visit a...
Easy and Delicious Banana Bread Recipe
Scrumptious Easy Chicken Pot Pie Recipe
5 Things I Wish I Knew Before I...
10 Favorite Hamilton Quotes to Make You Smile
6 Amazing Self-Help Books to Read Now
What You’re Giving Away in Those Social Media...
What’s That Your Ancestor Died From?
LWB Most Popular Posts of 2019
Bargains & FindsHealth & Beauty 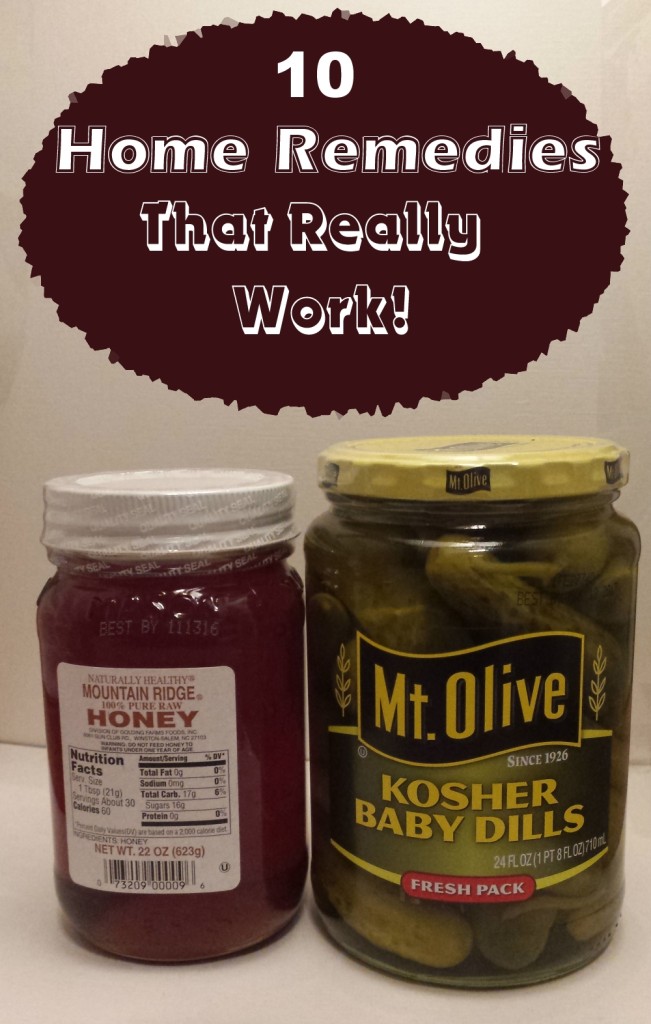 Over the years, I’ve collected a fair number of home remedies for various ailments. My family uses some of them without even thinking about it.

First, I want to say that I’m not against standard medical treatments, which have saved the lives of both myself and people close to me. I’m fine with using medical treatments and taking prescription drugs. No problem. However, sometimes there isn’t a “normal” treatment that works very well and/or the standard treatment is really expensive.

Drugs also have side effects. Even home remedies can have side effects, although I haven’t experienced any significant ones from the natural remedies on my list. Just because something is “natural” doesn’t mean it’s healthy or free of any possible ill effects. Arsenic and mercury are among the natural substances I sure wouldn’t want to ingest.

I’ve used the following home remedies because they’re cheap, easy and effective. They’re not a substitute for medical treatment, and I don’t intend to provide medical advice here – just some tips on strategies that worked for my family and me.

I should also mention that I have no placebo effect. Trust me on this. I’ve really wished for some modicum of a placebo effect many a time, but no.

I don’t doubt that there’s a placebo effect for some folks, but I can’t even get caffeine to keep me awake, much as I’d like for it to on occasion. Here are my family’s favorite home remedies.

I haven’t had good experiences with cheap or store-brand honey, so I advise going for the good stuff. You may already know that antibiotics won’t help with a common cold or even most bouts with bronchitis. Colds and most bronchial infections are viral, not bacterial, so antibiotics won’t do a bit of good. Plus, over use of antibiotics contributes to the very serious problem of antibiotic resistance.

You probably also know that over-the-counter cough and cold medicines won’t shorten the duration of a cold or cough. But, did you know that they probably won’t even help relieve cold or cough symptoms? That’s right.

Research published in the Journal of Pediatrics found honey more effective than either OTC dextromethorphan or prescription codeine in relieving coughing in children. Honey is considered safe for children over the age of 1, where as OTC cough meds shouldn’t be given to children under 4. OTC cough meds can have some onerous side effects in children, over and above the fact that they likely don’t work any better than a sugar pill.

can relieve coughs, so I thought I’d try some next time my young daughter had a cough.

I tried it myself first and thought it tasted so horrible that I’d never get my daughter to drink it. However, she didn’t mind the taste of it. A preschooler at the time, even she was impressed with how well it relieved her cough, and she started asking for it anytime she developed a cough that honey didn’t relieve.

I want to emphasize that anyone who has a serious or prolonged cough should definitely see a doctor. You want to make sure the cough doesn’t indicate anything more serious than a virus that needs to run its course.

Also, if you have flu symptoms, you should get to a doctor on the double. Physicians can prescribe medications to help you get over the flu more quickly, but only if you take it shortly after the onset of symptoms.

I used to get big, ugly cold sores on my mouth two or three times a year. I tried (expensive) prescription meds as well as over the counter concoctions, none of which made much difference in the duration of a cold sore. After reading about the possibility that L-Lysine might keep cold sores at bay, I gave it a try, starting with 500 mg a day. Much to my amazement, I went years without a cold sore.

Eventually, I began getting cold sores again, once or twice a year, and upped the dosage of L-Lysine

to 1000 mg a day (taking two tablets if I actually did get a cold sore, to shorten its duration). Brand makes a difference, too – some store brands just don’t cut it.

L-Lysine has been an absolute miracle for me, with no known side effects. I still get the occasional cold sore, but increasing the L-Lysine dosage helps it heal pretty quickly.

Close family members of mine have tried statin drugs such as Lipitor and had to stop taking them due to undesirable mental side effects such as forgetfulness and other problems with short-term memory. They have since tried red yeast rice and found that it succeeded in lowering their cholesterol without the onerous side effects of statin drugs (and at a much lower price).

Doctors still doubt red yeast rice’s effectiveness and push statin drugs, but how can you argue with the fact that their cholesterol counts went down when taking it? Our favorite brand is Nature’s Plus – Extended Release Red Yeast Rice 600 mg tabs (7361)

Pouring a small pitcher of distilled water in one nostril so it runs out the other sounds gross, and looks kind of gross, too. It also takes some practice to get it right, and it feels weird the first couple of times.

Once you get the hang of it, though, it works better for allergies and sinus infections than anything else you can buy. It takes less than a minute to flush the allergens and irritants out of your sinuses. I’ve also had a couple of doctors recommend this treatment.

The catch is that you have to be able to clear out your sinuses first. If they’re swollen, you won’t be able to use the neti pot

properly, and the water will run down the back of your throat, which feels and tastes yucky.

I don’t remember where I read about dill pickles for hiccups, but my kids and I swear by them. The Internet overflows with various hiccup remedies, and I’ve never found another one that works like dill pickles. I have no idea why dill pickles would cure hiccups, but we always have them in the fridge anyway.

My girls like dill pickles and don’t mind eating them to get rid of hiccups. In fact, they absolutely insist on having a dill pickle anytime they get the hiccups.

Yoga for Pain and Injuries

After an accident several years ago left me with severe hip pain, I tried both prescription and OTC NSAIDs that didn’t help the pain much. I couldn’t ride my exercise bike. Even walking was agony.

My sister suggested trying yoga and loaned me her Lilias yoga video. I resisted yoga, though, because I associated it with weird positions that there was no way my body could get into.

My sister insisted that Lilias yoga was different, and out of desperation, I tried it. The improvement was amazing. Lilias yoga

included a few poses that I couldn’t do right away, but nothing like standing on my head or folding myself into a pretzel. Lilias doesn’t look like a workout queen, either.

Lilias Folan looks like a normal woman with a normal looking body and no crop tops or six-pack abs. She seems like just your average, every-day person you might see on the street or have for a friend. I ended up buying one of her DVDs and have been doing the same yoga video two or three times a week as part of my exercise routine ever since.

When my younger daughter was a toddler, I tripped over something while carrying her, fell and landed on my arm, protecting her but injuring my shoulder when all of her weight and mine landed on my arm. Again, medications provided limited relief for the excruciating pain. A coworker told me about a yoga pose she’d heard about for rotator cuff injuries, so I did some research and found the yoga pose.

By the time I located this yoga pose, I’d been living with the pain for a few months, and the yoga pose was somewhat painful and cumbersome to execute at first. Within a few days, though, I started to feel marginal improvement, and the pain gradually subsided over the course of several weeks of holding this pose morning and night. 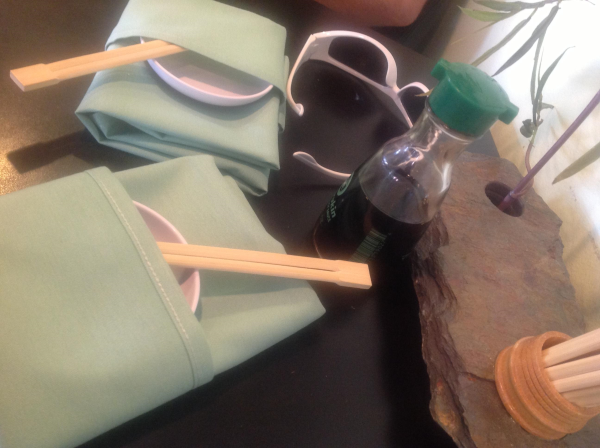 People’s Pharmacy syndicated column. It sounded weird, but I remembered it the next time I burned myself and tried it. Strangely enough, the burn left no mark.

I was accustomed to running cool water on a burn, which provides a bit of temporary relief, but doesn’t keep the burn from leaving a mark. Soy sauce is another remedy my kids have picked up on. Any time somebody gets burned, my older daughter yells, “Get the soy sauce!”

When I was a teenager, doctors insisted that diet had no effect on acne. Guess what? They were wrong.

I think diet must have an intensely personal effect on acne – differing from individual to individual. For me, it was bananas, of all things, my favorite fruit, which I gave up after reading about its possible effect on acne.

I’d tried dietary changes before and thought, what the heck? I can give up my daily banana and see what happens. So, as it turned out, no more bananas for me. For others, it might be wheat products, dairy, chocolate or something else.

We haven’t yet figured out whether a particular brand or formulation of toothpaste works better than the others, and toothpaste is a bit of a messy business to rub on one’s skin. However, it does seem to relieve the itching better than OTC creams.

We’ve used toothpaste on mosquito bites, and it might also work on bee stings and chigger bites. Given that some people use a baking soda paste for bug bites or stings, the toothpaste remedy might stem from the baking soda some toothpastes contain.