New Posts
Eat This Instead of That
How to Remove Scratches from Sunglasses
Look for These Changes When You Visit a...
Easy and Delicious Banana Bread Recipe
Scrumptious Easy Chicken Pot Pie Recipe
5 Things I Wish I Knew Before I...
10 Favorite Hamilton Quotes to Make You Smile
6 Amazing Self-Help Books to Read Now
What You’re Giving Away in Those Social Media...
What’s That Your Ancestor Died From?
Family & KidsHow-To 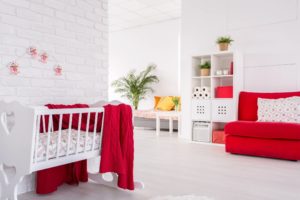 After your kids are long past the baby stage, you might find yourself with a bunch of baby stuff that’s taking up oodles of space in your garage, basement, attic or closets.

What’s great about some of your unwanted baby gear is that you can sell it. For smaller, shippable items, research past sales on eBay to get a feel for what you should list your own items for.

For larger items, use current prices on Craigslist as a guide. Keep in mind, though, that just because people are asking a certain price doesn’t mean they’ll get it. There’s no way to tell on Craigslist what items end up selling for, or even if they’ve sold at all.

Make sure that your items are as spotlessly clean as possible before attempting to sell them. Nobody wants to buy a dirty or stained item.

Take several photos of your item from various angles for your online listing. If the item folds up, take pictures of it when it’s folded and when it’s set up.

Also, check your items against online recall lists so that you don’t inadvertently sell something that’s been recalled, which is illegal. Here are 5 types of baby items you should be able to easily sell online.

You probably won’t be able to sell cheap umbrella strollers since they don’t cost very much to begin with. However, you should be able to unload your larger strollers. If your stroller came with a car seat, all the better.

A well used stroller will probably need some cleanup before you can list it for sale. Cleaning your stroller isn’t as hard as it might seem.

Fill a spray bottle with water and add a couple of tablespoons of Tide liquid, then shake to mix thoroughly. Use this spray with a clean rag to spruce up the stroller before you list it for sale. 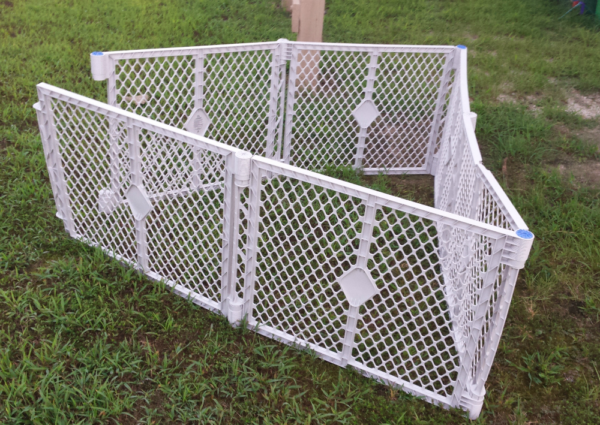 If you have a large, wraparound baby keeper, you might be able to sell it for 25 to 50 percent of what you paid for it. They’re not just in demand from parents, but also from those who need to keep a puppy or kitten corralled.

I don’t think Bumbo chairs existed with my first child, but we had a few of them for baby number two. We bought all of them on Craigslist and then resold them later for the roughly the same amount we bought them for.

Bumbo seats are wonderful, but you only use them for a few months. They’re durable, too, so they’ll probably still look nearly new after your baby outgrows them. They’re also expensive enough to buy new that parents will look for them on Craigslist.

Instead of a high chair, we used a booster seat that attached to a kitchen chair, which worked fabulously for both of our kids. You should be able to sell either a high chair or a chair booster seat on Craigslist.

You probably won’t be able to resell the low-end car booster seats (for children weighing 40 to 80 pounds) that only cost $20 at Walmart. However, more expensive car booster seats, baby car seats and 20 to 40 pound child safety seats should be fairly easy to sell in good condition. When selling my infant car seat, I kept a plastic cover visible on the top part of the seat to show that it had been kept covered when it was in storage.

To clean a car seat, either remove the cover and launder it, if you can, or use the spray cleaner referenced above (Tide mixed with water).

If you’ve shelled out for one of those baby carriers that hugs your infant close to your body, you can probably get a few bucks for it by selling it on Craigslist or eBay. Many such carriers are small enough to ship, making eBay a good option.

However, if you think you can get more than $20 for it, you might try Craigslist first since it’s free. I’ve found that most people won’t drive to buy something unless it costs at least $20 to $30.

There’s no reason for anyone to pay full price for a new Pack ‘n Play when they’re for sale on Craigslist for a fraction of the cost. When you’re through with your Pack ‘n Plays, you can head back to Craigslist and resell them.

Break out the homemade spray cleaner again to clean the fabric. Use a Mr. Clean Magic Sponge to remove crayon marks from the hard surfaces. 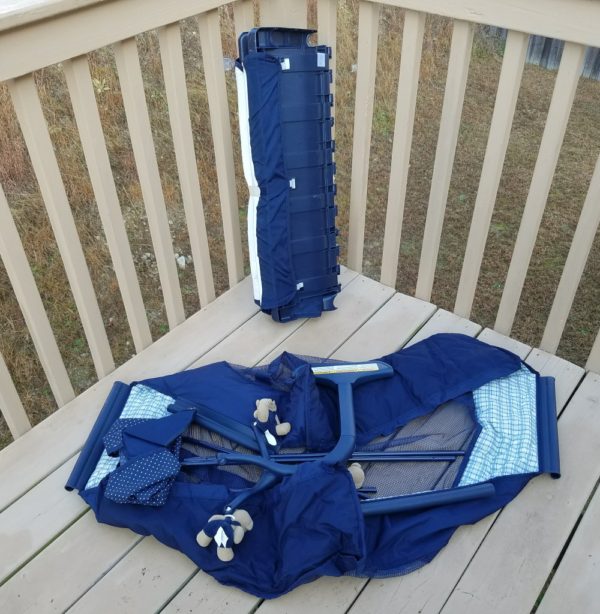 For best results, take photos of the Pack ‘n Play when it’s completely set up and when it’s folded. Also include individual pictures of the various parts such as the changing table if it has one.

While some parents prefer to buy their cribs new, others don’t mind saving a bundle by purchasing a gently used one. I definitely wouldn’t buy a used crib mattress, but the rest of a crib is wooden and easily cleaned and disinfected.

Be careful about selling cribs since many of these have been recalled. We used a drop-down crib for both of our kids. I discovered later that our beautiful, sturdy crib had been recalled, and it was by then too late for me to order a repair kit.

That recall rendered our crib completely worthless since I could no longer even give it away legally. We ended up having to take it to the city dump to get it out of our garage.

You can resell some of your higher end crib bedding, shoes and clothing on eBay. If you know something would cost a lot to buy new, go ahead and look up past sales of similar items on eBay to see what they’re going for.

You could sell expensive crib bedding and other nursery accessories from brands such as Pottery Barn Kids. Designer duds for babies can also fetch a few bucks, especially dressy clothes you might have bought for pictures or special occasions. Unique items can also sell well, such as the M&M jacket both of my daughters wore when they were small. 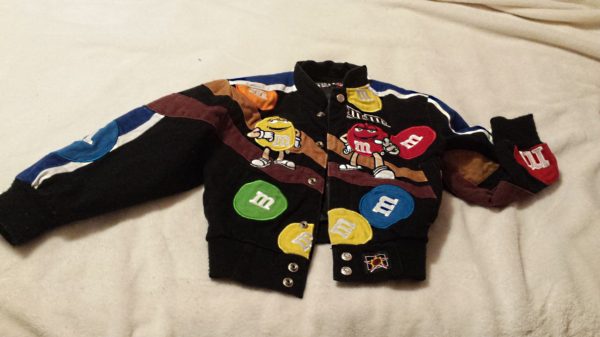 Be cautious about selling your stuff on consignment or selling items to a shop that buys your stuff outright. You’ll likely get very little cash for your items and come away feeling robbed. I know this from personal experience and from hearing about friends’ experiences.

Baby swings can also fetch some cash on Craigslist. I took most of my baby gear outside to get the best photographs, and this was especially important with baby swings. To get every angle without unsightly shadows, you need to be outside either on cement or on a nice grassy surface. 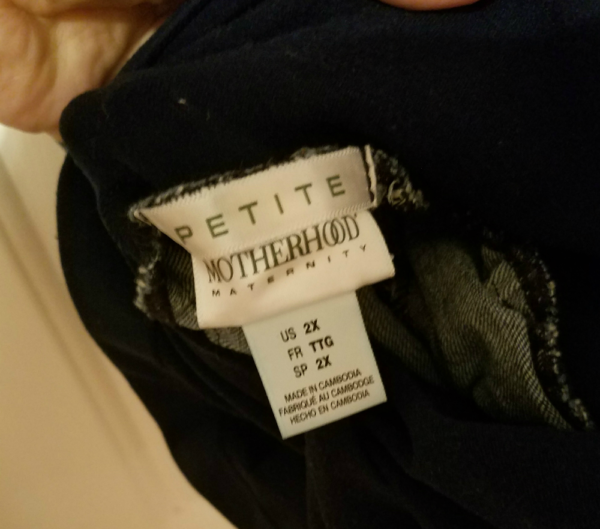 If your pre-baby clothes are still in good shape, you might be able to list them individually or in lots of two or three items on eBay. Plus size maternity clothing is especially in demand. You can easily search past sales in eBay to find out whether the pieces you have will fetch enough money to make it worth your time. 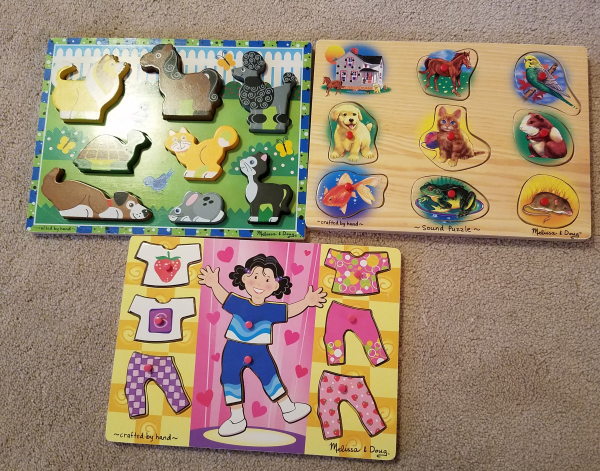 Some baby and toddler toys retain a good bit of value. The toys most likely to retain value are the ones that started out pricey to begin with, especially if they remain popular.

You might also be able to sell pieces or parts of toy sets that kids might commonly lose. For example, my girls played with a Word Whammer from Leapfrog. 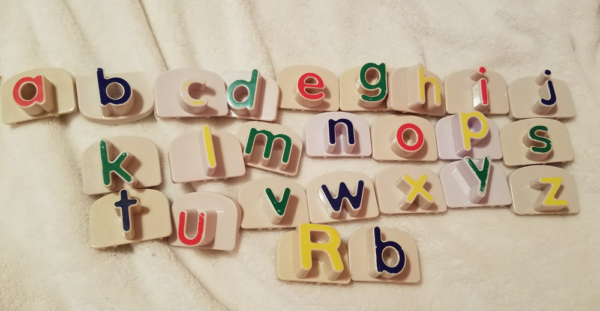 At some point, we bought some extra letters from eBay. When my kids outgrew the Word Whammer, I tried to sell the whole set, with the extra letters, and failed. Then, I listed the original Word Whammer with its letters and created a separate listing for the additional letters. Both items sold quickly to different buyers.

In addition, I’ve sold Mellissa and Doug puzzles in a lot of three. Make sure to weigh heavy items like these that you plan to ship, and charge calculated shipping on eBay. Otherwise, you might pay more to ship the item than your actual sale price.

How did you get rid of your old baby gear? Did you donate it, give it to friends or sell it? 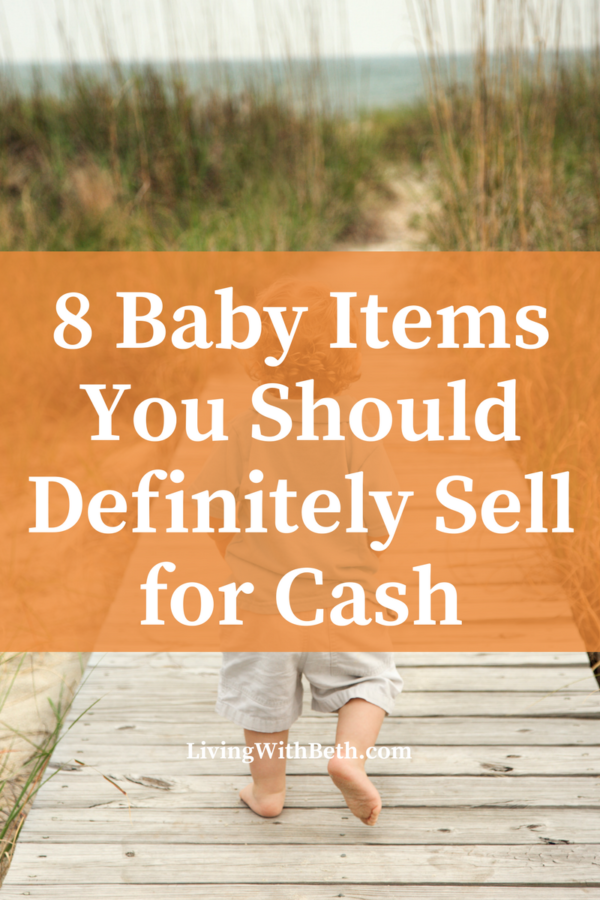 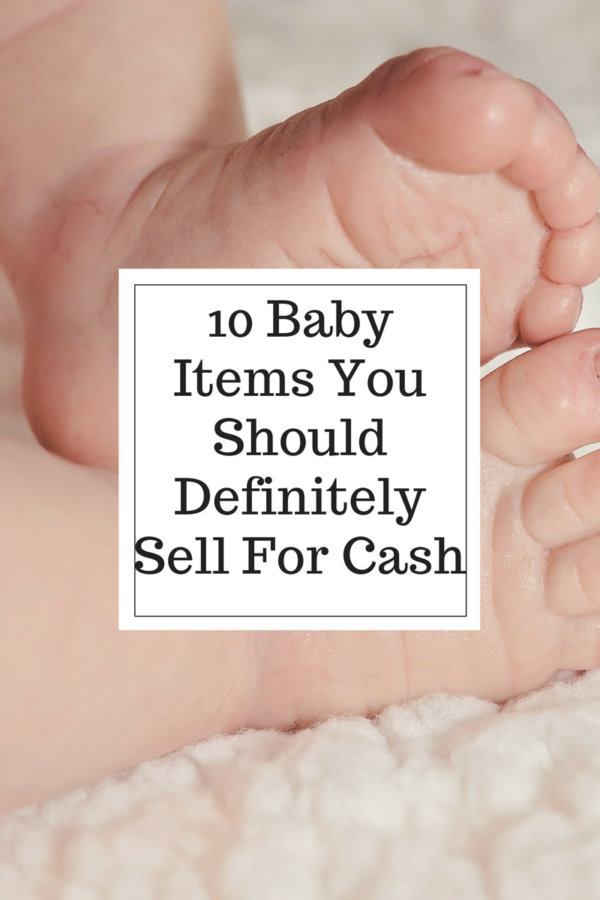 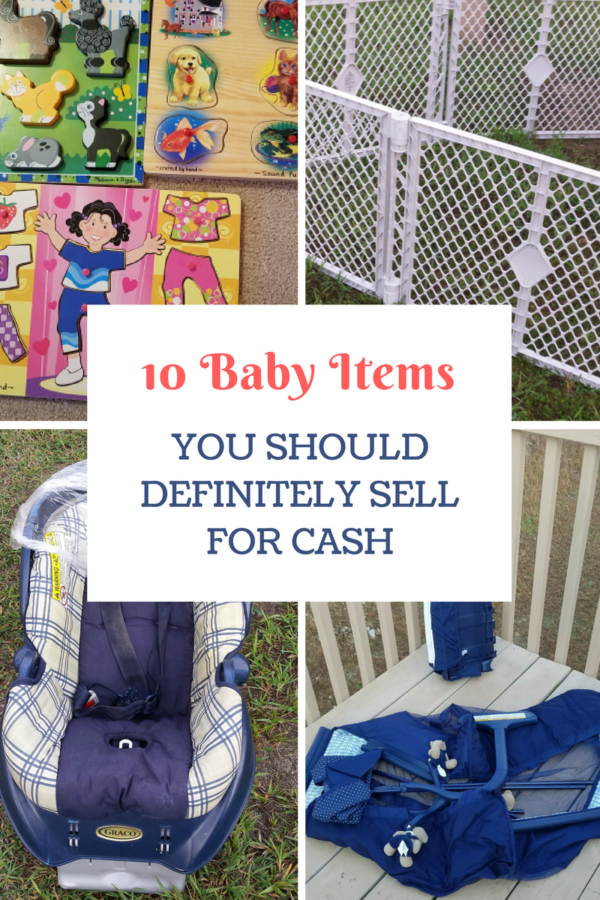