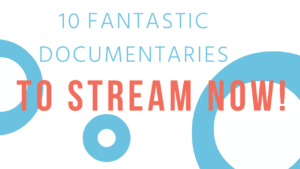 I’ve long preferred nonfiction TV as opposed to standard scripted or “reality” programming. Since cutting the cord on satellite TV, I’ve combed Netflix and Amazon Prime Video for the most fascinating and entertaining documentaries and came up with this list.

I’ve tried to concentrate mostly on movie-length documentaries of more than an hour, with some exceptions. There are scads of great biographies of famous people available on Amazon Prime Video which generally run 45 to 50 minutes or less.

How about you? Have you seen anything on this list, or do you intend to watch any of them? 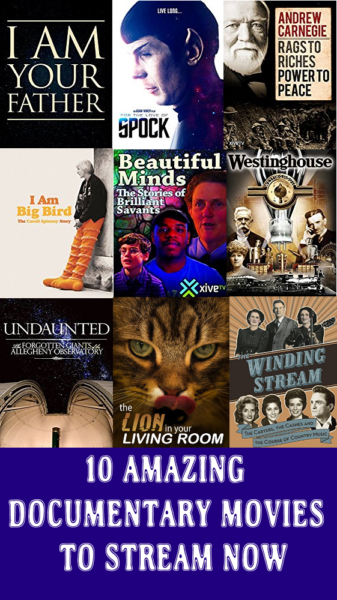 The Winding Stream follows the story of the history of the Carter family of singers. They were American music royalty in the early 20th century, long before a daughter of the family, June Carter, married country singer Johnny Cash, father of Rosanne Cash.

Rosanne would also become a successful country singer. June’s daughter from a previous marriage, Carlene Carter, is a popular country music artist as well. You can watch The Winding Stream free with a Netflix subscription or rent it from Amazon Instant Video.

I Am Your Father

I Am Your Father tells the story of David Prowse, the actor in the Darth Vader costume in the original Star Wars trilogy (the voice was that of James Earl Jones). The movies never revealed Prowse’s face, even showing another actor in the final scenes of Return of the Jedi when Vader’s mask is removed.

Conflicts with George Lucas led to Prowse being banned from attending Star Wars conventions. In this documentary, a young movie director attempts to pay tribute to the now-elderly Prowse.

Prowse had some interesting and successful career roles in the years prior to Star Wars, too. You can watch this film free with a Netflix subscription or rent it through Amazon Instant Video.

For the Love of Spock

For the Love of Spock is a moving portrait of Mr. Spock and the actor behind the character, Leonard Nimoy, through the eyes of Nimoy’s son, Adam. I’m not really a Star Trek fan, but I’ve long been amazed by the Star Trek phenomenon. You can watch this documentary with a Netflix subscription or rent it for 99 cents from Amazon Instant Video.

The Lion in Your Living Room

The Lion in Your Living Room is only available on Netflix as far as I can tell. As a lifelong cat lover, I thought I knew a lot about our feline friends. Turns out, there are some very interesting tidbits I didn’t know.

For example, domesticated cats have evolved to meow past childhood in order to talk to their humans. Other cats only meow as youngsters, to communicate with their moms. Think about it – when do your cats ever meow to other cats? They only meow when they want something from their people.

Experts also talk about purring and why some cats (like mine) chatter. I enjoyed watching The Lion in Your Living Room and recommend it highly to anyone who shares his or her life with cats.

Double Identity: The Mystery of Twins

I wouldn’t really call Double Identity: The Mystery of Twins a true mystery, but researchers have discovered a number of intriguing things about twins. That makes for an interesting and educational documentary, which you can watch free with Amazon Prime.

Andrew Carnegie: Rags to Riches, Power to Peace follows the life of a penniless Scottish immigrant who sailed to America in the 1840s and became the richest man in the world by the end of the 1800s. He created a steel empire with his business acumen. However, Carnegie believed that “to die rich is to die disgraced,” so he spent his later years devoted to social activism and philanthropy.

In addition, Carnegie helped fund Carnegie Hall in New York City and Carnegie Technical Schools, which evolved into Carnegie Mellon University. You can watch this film free with your Amazon Prime subscription.

Everyone’s heard of Thomas Edison, but to most folks, Westinghouse is just a name we see on kitchen and laundry appliances. Actually, George Westinghouse was an important inventor whose legacy impacts society at least as much as, if not more than, Edison.

Edison sought the spotlight and took credit for the work of his underlings. Westinghouse, on the other hand, wasn’t much of a publicity seeker and allowed his employees to register patents in their own names.

Westinghouse also treated his workers well by the standards of the time period. During an era when a six-day workweek was standard, he instituted a half-day off on Saturdays for workers at his Pittsburgh factory. You can watch this film free with your Amazon Prime subscription.

In Beautiful Minds, you’ll meet a number of autistic savant individuals – people with autism who have amazing abilities. For example, some have incredible recall of their life events or books they read. Others can calculate complex math problems in their heads. You can watch this documentary free with your Amazon Prime subscription.

I Am Big Bird: The Carroll Spinney Story

Who doesn’t know and love Big Bird? In I Am Big Bird: The Caroll Spinney Story, you’ll meet the beloved puppeteer behind Big Bird and Oscar the Grouch for the last 45 years. You can watch this film free with your Amazon Prime subscription.

Undaunted: The Forgotten Giants of the Allegheny Observatory

Undaunted: The Forgotten Giants of the Allegheny Observatory introduces us to the early scientists of the Pittsburgh-area Allegheny Observatory. Their discoveries still resonate today and led to the field of astrophysics. The film includes commentary by famous astrophysicist Dr. Neil DeGrasse Tyson, and you can watch it free with your Amazon Prime subscription.

What You Need To Know Before Building a Wood Deck