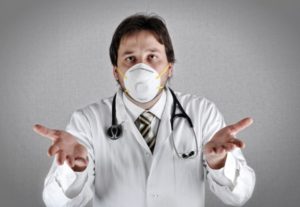 Researching your ancestors may sometimes feel like you’re reading from the pages of a historical novel. Many times, it’s a mystery novel as well. If you want to know what illness killed your relative, the diagnosis might make no sense at all. Here’s a list of old-fashioned names for common illnesses that might have killed your ancestors.

Apoplexy – Usually refers to a stroke or hemorrhage.

Camp fever/ship fever – Typhus, which killed millions of people in previous centuries but is now considered uncommon and treatable with antibiotics.

Dropsy – Edema (fluid retention); can have a number of different causes, including heart failure and kidney disease.

French disease or French pox – Syphilis, a bacterial sexually transmitted disease which is now easily curable but used to cause a horrendous death sometimes preceded by horrific disfigurement and insanity.

Lockjaw – Tetanus, a severe illness causing locking of muscles all over the body, sometimes including the jaw, making it impossible to open the mouth to breathe, eat or swallow. Currently uncommon due to vaccination.

Scrofula – Tuberculosis of the bones and lymphatic glands. Tumors and swelling on the neck resulted in severe disfigurement. For a while, it was believed in England that the reigning monarch could cure this disease.

LWB Most Popular Posts of 2019

What You’re Giving Away in Those Social Media Surveys

5 Reasons to Learn a New Language...