What You Can Expect to See in Outlander Season 4 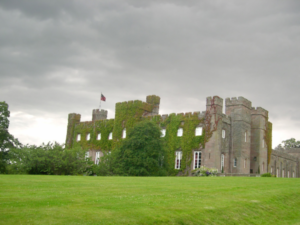 Fans of the Outlander TV show call the time between seasons “Draughtlander” with good reason. It’s a fantastic show, and there’s nothing else on TV to rival it.

Even those of us who have read all of Diana Gabaldon’s Outlander books eagerly anticipate a season of new episodes with Claire, Jamie and their friends and family. STARZ recently announced some new cast members, that season four will begin in November, and that the network has renewed the Outlander series through seasons five and six.

The TV series doesn’t follow the books exactly, but it does capture most of the key events. In fact, fans of the books will catch lines of dialog that come directly from the novels.

In case you haven’t read the Outlander book series, here’s what you can expect in season 4 of Outlander, based on book 4, Drums of Autumn.

Where the Action Is

Claire and Jamie, along with Young Ian, Fergus and Marsali, make their way to North Carolina and end up settling in the mountains of NC. Look for plenty of action on their journey and once they arrive.

Claire and Jamie remain the central characters in book 4 (of course), but look for other characters to take center stage more often.

Claire and Jamie’s daughter Brianna and her beau Roger feature predominantly in the Outlander novels starting with book 4.

Young Ian becomes more of a major player, along with his new best friend, Rollo. Fergus and Marsali play minor roles, along with their children as they come along. Marsali apparently ignores Claire’s advice on birth control, or the methods available in the 18th century aren’t very effective.
Embed from Getty Images

John Grey continues to play a significant part in Claire and Jamie’s lives. Grey rarely sees the Frasers, but he and Jamie stay in touch through lengthy letters, which they exchange through a new character, Bobby Higgins.

Grey and Jamie’s paths cross on occasion, and they are always there to help each other when the need arises. They remain close friends even though Jamie knows they must come down on opposite sides of the coming Revolutionary War.

Blinded by glaucoma, Aunt Jocasta needs to find a husband, since a woman alone can’t keep running a large plantation in the 18th century. She also needs an heir, but the Frasers want nothing to do with inheriting a plantation dependent on the work of dozens of slaves.

It’s no spoiler to reveal that Brianna decides to travel through the stones to find her parents in 18th century North Carolina – it’s right there in the book description on Amazon.

The following ARE spoilers, so be advised before reading.

Roger figures out where Brianna has gone and follows her there. The ability to travel through the stones is apparently inherited. Remember that Geillis (last seen as the crazy lady holding Ian hostage) was Roger’s ancestor, through the child of Geillis and Dougal.

Roger and Brianna experience a number of adventures and tragedies separately before they find each other again.

Jamie and Claire come to regret helping to save a charming convict who escaped the hangman’s noose. They believe his sob story about being a minor criminal who didn’t deserve execution. Nothing could be further from the truth.

Claire discovers that others have traveled through time using stone circles – and that many other stone circles exist besides the ones she and Brianna used in Scotland. (Does Google Maps know about this? :-))

Jamie gets to see and spend time with William, his biological son who is an English earl. Meanwhile, Claire spends time with John Grey. Initially wary of each other and jealous of each other’s relationship with Jamie, they eventually grow fond of one another. Claire comes to understand why Jamie thinks highly of John, and John comes to understand why Jamie loves Claire.

Seeds of a Revolution have already been sewn. Because Claire knows what’s coming and how it’ll turn out, Jamie walks a fine line of trying to determine when to switch sides. This time, he knows he’ll be on the winning end (unlike Culloden), but that doesn’t mean he and his family will emerge unscathed.

Season 3 of Outlander was based on book 3, Voyager. At the end of Voyager, Jamie is about 45 years old and Claire is about 50.

Don’t worry, though. They remain both physically and sexually active throughout the remaining novels in the series. I wonder how the TV series will go about aging the characters when the actors who play them are currently in their late 30s. However, TV and movies seem pretty good at ignoring characters’ ages and the aging process in general.

What the Future Holds for Outlander

One of the great things about the Outlander books is that they defy any sort of category or genre. If you read the summary of book one, “Outlander,” you might think that it’s a time travel romance. It most certainly is not!

It’s true that Jamie and Claire’s love is the centerpiece of the entire series. However, there are no typical romance novel plot lines.

They don’t break up over something silly and then get back together. Instead, we see Jamie and Claire as human beings who have good qualities along with imperfections.

Marriage isn’t easy, even with someone you love deeply. It’s interesting to see how they support and love each other through life’s ups and downs while understanding and tolerating each other’s foibles.

I wonder if Murtagh will turn up again in the TV series. In the books, Jamie’s loyal godfather was killed at Culloden. There’s got to be some reason why he didn’t die in the TV series. He was shipped off to the colonies as an indentured servant with the other prisoners.

I also wouldn’t be surprised to see Tobias Menzies (Black Jack and Frank Randall) show up again in future seasons of Outlander. The son of Black Jack’s brother comes around in later books after he’s reached adulthood.

What do you look forward to seeing in season 4 of Outlander? What new characters do you want to see most?