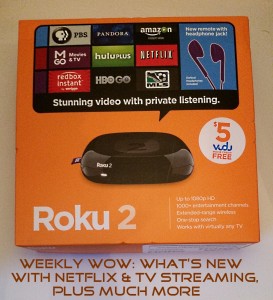 With its new Time Warner deal inked, Netflix now has agreements with all the major high-speed Internet providers for faster and better streaming. Netflix had previously made deals with Verizon, AT&T and Comcast to ensure smooth viewing experiences for their customers.

All the while, Netflix has lamented that Internet service providers now charge both the customer receiving Internet service and the content provider on the other end. This gives ISPs a significant amount of power that some fear could cause increased prices for consumers in the not-too-distant future. Shared via @Techhive.

From the “some folks will believe anything” department…

A few people must have thought it’d be a hoot to spread rumors on social media that crowds planned an actual “purge,” mimicking the recent movie sequel of the same name and its predecessor. The sequel, “The Purge: Anarchy,” depicts a futuristic America plagued by rampant crime, to the point where, for some reason, the government thinks it’s a good idea to make everything legal for 12 hours every year. So, if citizens can go out and rob, kill, mutilate and destroy to their hearts’ content for half a day each year, they’ll get it out of their systems and everything will be cool for the rest of the year, right?

And if a group of kids with too much time on their hands tried to replicate this type of thing in a U.S. city, the police would go along with it, and everything would go down like it does in a movie. #sarcasm

According to @Snopes, despite “warnings” in several cities, nothing purge-like has transpired, though police remain on the lookout for suspicious activity.

Unfortunately, it’s not an elaborate hoax – the Mythbusters have ditched their highly skilled and entertaining trio of Grant Imahara, Kari Byron and Tori Belleci. Apparently, Discovery Channel lost interest in continuing to run programming with any redeeming value. On the plus side, they’ve probably removed my last reason to pay $100 for satellite TV every month instead of rolling with just my @RokuPlayer.

Some car dealers might give you a $350 discount instead

A Lumberton, NC auto dealership has erected a sign offering free gun vouchers (up to $350) to customers who buy trucks from them. According to news reports, the dealer wants to help people exercise their second amendment rights by giving people guns to go with their trucks, and he’s timed the promotion to coincide with hunting season set to start in a few weeks. Shared via @TWCNewsRDU.