New Posts
Easy and Delicious Banana Bread Recipe
Scrumptious Easy Chicken Pot Pie Recipe
5 Things I Wish I Knew Before I...
10 Favorite Hamilton Quotes to Make You Smile
6 Amazing Self-Help Books to Read Now
What You’re Giving Away in Those Social Media...
What’s That Your Ancestor Died From?
LWB Most Popular Posts of 2019
Amazon Echo Auto Review: Add Alexa to Your...
Real Estate Agents Turning to Amazon for Lead... 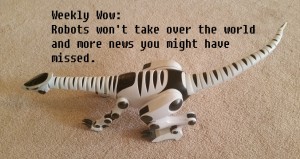 Here are a few cool news stories you may have missed from the past week.

A @GuardianTech article argues that artificial intelligence will not turn into a Frankenstein’s monster or take over the world like The Terminator’s Skynet.

The prospect certainly makes for bestselling books and blockbuster Hollywood movies. However, writer Alan Winfield says that too many things need to happen in order for computers and robots to destroy most of humanity, take over the world and usher in a horrifying dystopian future.

Says Winfield: “If we succeed in building human equivalent AI and if that AI acquires a full understanding of how it works, and if it then succeeds in improving itself to produce super-intelligent AI, and if that super-AI, accidentally or maliciously, starts to consume resources, and if we fail to pull the plug, then, yes, we may well have a problem. The risk, while not impossible, is improbable.” Shared via @Guardian.

Speaking of someone taking over the world…

Walmart has expanded their slick price matching system called Savings Catcher nationwide. You need to sign up for a Walmart.com account if you don’t already have one, then upload a copy of your Walmart store receipt. Next, Savings Catcher will automatically scan local ads for lower prices and issue you a Walmart gift card equal to whatever amount you paid that was more than the lowest advertised price in any competitor’s ad. While there are some catches and you still can’t duplicate certain types of savings such as double or triple coupons at Walmart, their items almost always cost less than the regular price at average grocery stores. Shared via @amygdunn.

Gmail makes it easier to unsubscribe

Gmail announced it will begin prominently displaying an Unsubscribe link on promotional or newsletter type emails, adding a feature which Outlook.com already offers. Gmail duplicates what it sees as an Unsubscribe link in the email itself, which is often in small print and hard to find. Google didn’t indicate whether they plan to add this feature to its smartphone apps for iPhone or Android. Shared via @ForbesTech.

America’s Smokey the Bear campaign began in 1944, but its origins started back on Dec. 7, 1941, when Japanese pilots bombed Pearl Harbor. According to Mashable’s splendid account of Smokey the Bear’s fascinating history, the government feared that the Japanese would attempt to set forests ablaze during the war. Plus, with so many men fighting overseas, few able-bodied guys remained in the U.S. to fight any forest fires that broke out, no matter how a fire started. Thus began a longstanding educational initiative to inform people how to prevent forest fires. Shared via @Mashable.

@Forbes reports that a New York Hotel, the Union Street Guest House, was adding language to its contracts that would fine a couple who booked a wedding $500 each time a guest posted a negative online review. The article calls such fines “almost certainly unlawful,” and notes that this isn’t the first time companies have tried to stifle online criticism. For example, some doctors and dentists have required patients to sign papers indicating that they promise not to post online reviews. Apparently, it hasn’t occurred to these companies’ execs that the viral outpouring of bad press resulting from such contracts would far overpower any possible bad reviews someone might have posted.

BlogHer and The Huffington Post have teamed with nonpartisan think tank the Center for American Progress to launch the “Make Life Work” initiative. BlogHer and Huffington Post will feature articles telling stories of average Americans’ struggles balancing the needs of family and career demands, with the Center for American Progress lending their vast store of research and information on these topics. Shared via @SEJournal.

How to Set Up Roadrunner Email On iPhone, iPad or Android