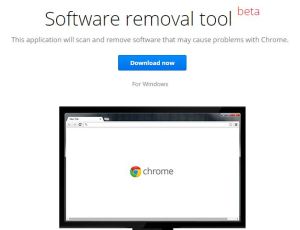 Lifehacker reports on Google’s new Software Removal Tool, which Google says will scan Chrome for harmful software and remove it. While not a substitute for good security software, Google’s SRT could prove helpful as another line of defense against malware.

In its six years of existence, Chrome has seized between 20 to 45 percent of browser market share, depending on who you ask, trampling Mozilla Firefox in its wake. Most malware arrives through your Internet browser, often causing problems with it. That makes it seem reasonable for the Internet browser to give you a tool for cleaning itself. Via @Lifehacker.

A German tech journalist claims that Apple blacklisted him after he posted a video showing the bending of an iPhone 6. An Apple rep allegedly threatened the reporter with pulling his access to Apple demo devices and Apple media events.

The Register reported that the journalist, a big fan of Apple products, was shocked at how easy it was to bend the iPhone 6. The U.K. publication received no response from Apple to their request for comment. Apparently, I’m not important enough for Apple to make threats against me when I write about iPhone 6 deficiencies. Shared via @steveology.

The North Carolina Attorney General’s office is among the consumer advocates trying to get the message out about companies that claim to sell magazine and newspaper renewals but are actually fronts for scams.

The @NCAGO warns of an example in which Raleigh residents have received renewal notices from an “independent subscription agent” for the local newspaper, the News & Observer. The notices often list prices much higher than what the newspaper actually charges for subscriptions.

According to the NCAGO, the two companies sending out the letters, United Publishers Exchange and Associated Publishers Network, have histories of “questionable business practices” and have earned “F” ratings from the Better Business Bureau.

What’s in a Bulu Box? Here’s what was in my latest one