New Posts
Scrumptious Easy Chicken Pot Pie Recipe
5 Things I Wish I Knew Before I...
10 Favorite Hamilton Quotes to Make You Smile
6 Amazing Self-Help Books to Read Now
What You’re Giving Away in Those Social Media...
What’s That Your Ancestor Died From?
LWB Most Popular Posts of 2019
Amazon Echo Auto Review: Add Alexa to Your...
Real Estate Agents Turning to Amazon for Lead...
Hang Up on Social Security and Medicare Scammers
Bargains & Finds 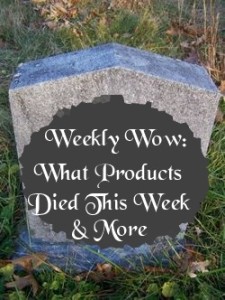 Of interest to bloggers and other Web content writers, Search Engine Roundtable reported the official demise of Google Authorship. The company dropped author images from its search results awhile back, and this past week, dropped Authorship altogether, saying that it hadn’t proved as useful to their customers as they’d hoped. However, Author Rank remains, according to Search Engine Land. It appears that although Google no longer displays authorship images and notices in search results, they still know who writers are and how to match writers with their content. Shared by @rustybrick.

@Mashable reported that Microsoft killed its old-school Messenger IM product. Known as Windows Live Messenger and formerly called MSN Messenger, it largely died a couple of years ago but has hung around with a dwindling population of overseas users until Microsoft announced its official demise this past week.

Is that six-pack of beer a little small for you?

@Mashable also reported on people who are grateful for the newly available 99 pack of beer. Austin Beerworks’ Peacemaker Anytime Ale 99 pack costs $99, measures 7 feet long and weighs 82 pounds. The craft brewer’s limited run of the giant beer packs sold out quickly, probably due to the huge amount of nationwide publicity they attracted, and there’s no word on if or when more of them might become available.

The Secret to Saving on All of...