New Posts
Scrumptious Easy Chicken Pot Pie Recipe
5 Things I Wish I Knew Before I...
10 Favorite Hamilton Quotes to Make You Smile
6 Amazing Self-Help Books to Read Now
What You’re Giving Away in Those Social Media...
What’s That Your Ancestor Died From?
LWB Most Popular Posts of 2019
Amazon Echo Auto Review: Add Alexa to Your...
Real Estate Agents Turning to Amazon for Lead...
Hang Up on Social Security and Medicare Scammers
Bargains & FindsGift Ideas 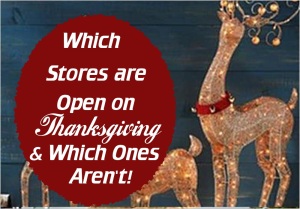 As retailers clamor for every last dollar they can convince customers to spend with them instead of competitors, the list of what stores are open on Thanksgiving doesn’t seem to shrink.

Here’s a list of major stores open on Thanksgiving to start their Black Friday deals, based on media reports, retailer Web sites and press releases, along with their opening times.

Following is a list of major stores closed on Thanksgiving.

Stores in some states can’t open on Thanksgiving. According to a Huffington Post article, Rhode Island, Massachusetts and Maine have laws on the books making it illegal for large retailers to open on Thanksgiving. These “Blue Laws,” believed to date back to colonial times, also ban certain stores from opening on Christmas and sometimes Easter and other holidays. Blue Laws in southern states often prohibit selling alcohol on Sunday mornings. Rhode Island repealed its ban on Sunday alcohol sales recently, but kept its Thanksgiving holiday law.

Retailers in certain malls must open their doors on Thanksgiving or face fines. One longtime mall retailer said that while Thanksgiving hours are a fairly new phenomenon, malls have always required their tenants – large or small, both short-term and long-term – to remain open during mall operating hours. The requirements are written into each mall tenant’s contract. Therefore, some retailers may open their stores in malls which require it on Thanksgiving, while leaving the doors closed on their other locations.

What stores are open on Thanksgiving Day and what stores are closed was last modified: September 9th, 2016 by Beth
Black FridayHolidaysThanksgiving
2 comments
0
Facebook Twitter Google + Pinterest