New Posts
What’s That Your Ancestor Died From?
LWB Most Popular Posts of 2019
Amazon Echo Auto Review: Add Alexa to Your...
Real Estate Agents Turning to Amazon for Lead...
Hang Up on Social Security and Medicare Scammers
How to Improve Your LinkedIn Profile
10 Secret Confessions of a Technology Pro
Why You Should Never Use Debit Cards for...
Why I’m Glad I Gave Aldi Another Try
What’s Coming in Outlander Season 5
EntertainmentFamily & Kids

Minions Movie Review: Yellow Despicable Me Characters Hold Their Own 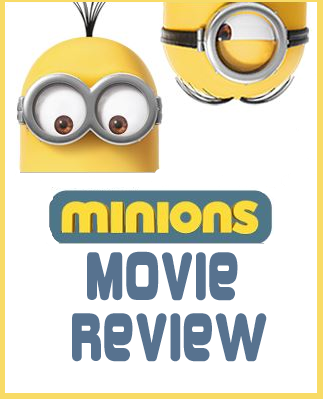 The “Minions” movie starts off hysterically funny and never loses its groove throughout the film, with its scores of Despicable Me characters taking center stage.

If you’ve seen “Despicable Me” and/or its sequel, you’re familiar with the cute little yellow Minions, the somewhat hapless Despicable Me characters who serve super villain turned good guy Gru in those movies. The “Minions” movie explains where Minions came from and what they were doing for the eons leading up to their association with Gru.

It turns out that these little guys have been around for a very long time, always with the same goal – to serve an evil super villain. Despite being lovable and well-meaning, they also have a longstanding habit of inadvertently (and hilariously) killing off their evil masters. The movie initially takes us through the ages as the yellow Despicable Me characters serve their various bosses.

The Minions accidentally cause a fatal fall off a cliff for one of their first masters, a large Tyrannosaurus Rex dinosaur. Another of their evil masters is asleep in his coffin when the Minions surprise him with a birthday party during the day and open the window to let in lots of bright sunlight.

An early 19th century French emperor makes the mistake of letting the Minions accompany him into an important battle. The Minions end up fleeing from a pursuing army and settling into a peaceful life in a frozen climate.

Eventually, though, the Minions become despondent without an evil boss to serve. Three brave Minions decide to leave so they can save their tribe by finding a new villain to serve. 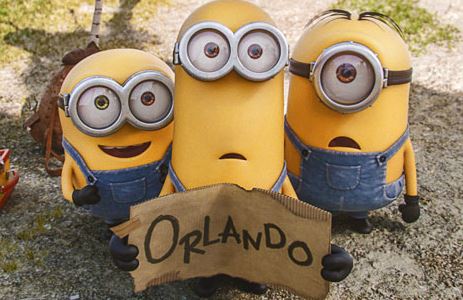 Villain Con’s top draw is the reigning queen of super villains, Scarlet Overkill (voiced by Sandra Bullock), who, it just so happens, is looking for a new henchman (or henchmen).

Kevin, Bob and Stuart manage to win the contest to work for Scarlet Overkill, and she whisks them away to England, where her inventor husband Herb (Jon Hamm) awaits. Herb is like an evil and somewhat dimwitted version of James Bond’s Q character and comes up with weapons to help the Minions execute an important mission for Scarlet. 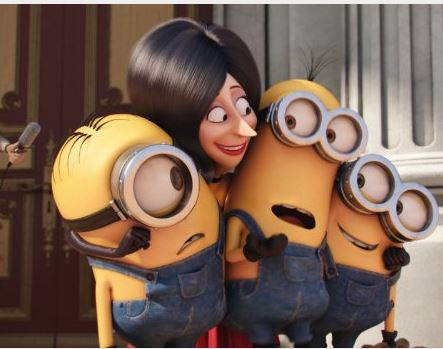 It seems the deranged Ms. Overkill wants to steal the crown from the queen of England (Jennifer Saunders) and sends the Minions to snag it for her. Of course, nothing goes as planned for Minions, but they still try to please their master even after she turns on them. Unfortunately for the Minions, Scarlet adorns herself in fancy armor disguised as clothing and is harder to accidentally kill than their previous masters.

Meanwhile, the remaining Minions have found another evil villain to serve in their snowbound home. However, they end up running away from his friends when the big guy meets an abominable end. The Minions slowly make their way to England, thinking to join Bob, Kevin and Stuart with their new villain master.

I haven’t seen the first “Despicable Me” movie, but I enjoyed the sequel, “Despicable Me 2.” Even so, I didn’t have high hopes for the “Minions” prequel. Could the adorable yellow Despicable Me characters carry a movie on their own, with their slapstick comedy and gibberish language consisting of a mixture of English, Spanish, French and other languages?

Yes, the filmmakers have done an astounding job of making a clever, whimsical film with dozens of laugh out loud scenes. I received two free advance screening tickets to see “Minions” in 3D through N&O Zone Rewards and took my five-year-old daughter with me. We both thoroughly enjoyed “Minions,” with my daughter begging to see it again.

We may not be able to understand most of what these Despicable Me characters say in “Minions” or in either of the Despicable Me films, but their actions make it obvious what they’re trying to convey. Though the Minions aim to serve a super villain master, they always become unwitting super heroes with their well-meant bungling.

Parental Information: Universal Pictures and Illumination Entertainment’s “Minions” movie is rated PG. I don’t recall any cuss words or anything overtly sexual. The movie contains a fair amount of cartoonish violence like you’d see in a Bugs Bunny cartoon.

The closest thing to nudity is when the Sumo wrestler villain runs around in his loincloth. Herb attempts to subject Bob, Stuart and Kevin to medieval torture devices, in one of the movie’s most uproarious scenes.

For 30 minutes prior to the movie start time, advertisements ran on the screen for movies and TV shows that were definitely not kid-friendly. You may want to check with your theater to see if these previews will be running prior to the “Minions” movie.

If so, you can either plan to arrive shortly before the movie start time, or keep your kids busy with coloring or reading materials up until the movie starts. The lights were still on in the theater during this time, and my daughter was deeply involved in a LEGO magazine, thankfully.

If your kids can’t get enough of Minions, check out this cool list of 25 Minions crafts activities.

If you enjoyed this post, could you please click here to give it a G+1 and add to StumbleUpon, too?

Cricut crafting and DIY machines: There’s an app for that