New Posts
Scrumptious Easy Chicken Pot Pie Recipe
5 Things I Wish I Knew Before I...
10 Favorite Hamilton Quotes to Make You Smile
6 Amazing Self-Help Books to Read Now
What You’re Giving Away in Those Social Media...
What’s That Your Ancestor Died From?
LWB Most Popular Posts of 2019
Amazon Echo Auto Review: Add Alexa to Your...
Real Estate Agents Turning to Amazon for Lead...
Hang Up on Social Security and Medicare Scammers
Food & Recipes

Which is healthier: fast food salad vs burger 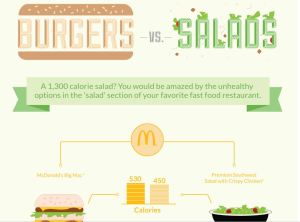 LabDoor recently released some interesting findings that may surprise those who think salads are always the much healthier choice at fast food restaurants.

The analysis found that a McDonald’s Big Mac, for example, has 530 calories, compared to 450 for the restaurant’s Premium Southwest Salad with Crispy Chicken. The Big Mac has 47 grams of carbs vs. the salad’s 42 grams, with protein roughly even at 24 grams for the Big Mac and 23 grams for the salad. The salad has 22 grams of fat to the Big Mac’s 27 grams.

Those looking to cut carbs might want to choose a salad over a sandwich at Subway. Their 12-inch turkey breast sandwich provides a whopping 92 grams of carbs, while their Buffalo Chicken Salad with Ranch Dressing contains only 13 grams. However, the sandwich has just 7 fat grams to the salad’s 26 grams. The salad has 360 calories vs. the turkey sub’s 438 calories.

Hankering for a Burger King Whopper? You’ll down a gigantic amount of sodium whether you choose the restaurant’s signature burger or their Garden Fresh Chicken Caesar Salad with Tendercrisp and Dressing – 1410 mg for the Whopper or 1760 mg for the salad. The Whopper contains 760 calories, while the salad has 670 calories. Both are high in carbs, too – with the burger containing 47 grams and the salad, 43 grams.

At Wendy’s, choosing a chicken sandwich over their Spicy Chicken Caesar Salad with Dressing means you’ll down 510 calories rather than the 670 calories in the salad. The salad is also higher in cholesterol and sodium, and it contains 41 fat grams to the chicken sandwich’s 19 grams.

Most fast food places offer nutritional information upon request in their restaurants, or even post such information on their menus. You can also find this information on the restaurants’ Web sites. It’s probably safe to say, though, that even menu items that appear healthy, like wraps and salads, won’t easily fit in with any diet or healthy eating plan without some help, such as removing the bun or wrapper on a burger or wrap to significantly decrease carb content.

LabDoor is a Web and mobile app providing product safety grading for drugs, supplements and cosmetics, including popular products from GNC, Centrum, Red Bull and 5-Hour Energy. The site offers both free and paid premium content.

Quick lunch ideas come together with ease on busy mornings