Gravity Falls: A TV Show for Kids That You’ll Like, Too 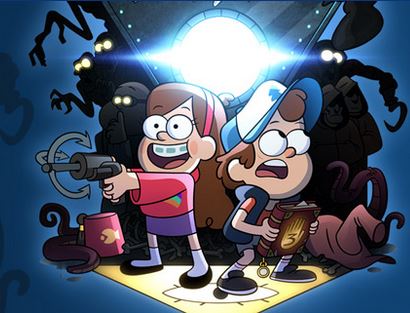 I don’t watch much TV and rarely get too involved in any show that interests my girls, ages 5 and 11. “My Little Pony” and “Littlest Petshop” just don’t do anything for me.

However, I’ve become hooked on DisneyXD’s “Gravity Falls,” a creative story about the 12-year-old Pines twins, Mabel (voiced by Kristen Schaal) and Dipper (voiced by Jason Ritter), sent to spend the summer with their great uncle in a small town called Gravity Falls, Oregon.

“Grunkle Stan” runs a tourist trap museum and novelty shop called the Mystery Shack and seems like a lovable, if gruff and somewhat shady, kind of guy who loves his niece and nephew.

Mabel and Dipper soon discover that Gravity Falls and the surrounding rural area harbor paranormal activity, secret clubs and supernatural creatures like gnomes and monsters. Dipper becomes obsessed with a set of journals he finds, written by a mysterious, unknown author who tried to explore the secrets of Gravity Falls.

Dipper is the more serious of the twins, while Mabel generally remains upbeat and positive, though both can keep a clear head in the face of danger.

I like entertainment related to supernatural phenomena and was a big fan of “The X-Files” back in the day. I don’t enjoy violence and gore, though, which rules out many of the popular zombie, vampire and other fantasy shows currently on the air. So, a kids’ show on one of the Disney channels is right up my alley.

I didn’t realize just how much I’ve gotten into the show until a cliffhanger episode a few weeks ago called “Not What He Seems.” Finally, my daughters and I gathered this past week to watch a new episode called “A Tale of Two Stans,” which answered many of the questions lingering from the first two seasons of the show.

Apparently, the show is still in its second season, but DisneyXD seems to regularly wait several weeks between running new episodes. DisneyXD runs older episodes of the show all the time, so if you and your kids want to catch up, you should have no trouble finding “Gravity Falls” episodes if you have a pay TV subscription.

If you don’t pay for cable or satellite, you can buy episodes of “Gravity Falls” from Amazon Instant Video

. You can also pick up many episodes inexpensively on DVD from Amazon.

One of the best things about Gravity Falls, aside from its creativity and entertainment value, is its adept handling and exploration of issues parents and kids can relate to. Here are a few examples.