New Posts
5 Things I Wish I Knew Before I...
10 Favorite Hamilton Quotes to Make You Smile
6 Amazing Self-Help Books to Read Now
What You’re Giving Away in Those Social Media...
What’s That Your Ancestor Died From?
LWB Most Popular Posts of 2019
Amazon Echo Auto Review: Add Alexa to Your...
Real Estate Agents Turning to Amazon for Lead...
Hang Up on Social Security and Medicare Scammers
How to Improve Your LinkedIn Profile
Education & HobbiesFamily & Kids

5 Things I Wish I Knew Before I Started Cycling 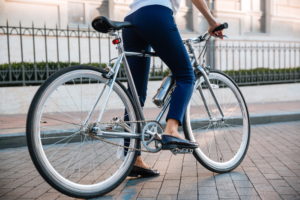 The old saying that you never forget how to ride a bike is a myth – at least in my case. I had to re-learn how to ride from scratch.

Looking back on the past several months, I wonder how in the world I got from doubting I could learn to ride a bike again to going for 10+ mile rides.

Nowadays, riding my bike is the highlight of my day, and rolling along on my new ebike is my happy place. While I still consider myself a novice bike rider, I thought I’d share the story of how I got started and what I’ve learned so far.

What Possessed Me to Start Bike Riding?

Most people wouldn’t look at me and think, there’s somebody who should try cycling! However, I’m in better physical condition than I look. I’ve exercised regularly for decades, riding my exercise bike and doing yoga.

Late last year, I mentioned to a cycling enthusiast friend of mine that I wish I could ride a bike again like I did as a teenager so that I could ride with my daughter. He said I should try it. I said no, I didn’t think I could do it. He looked me right in the eye and said, “Sure you could.”

Somehow, thankfully, I took it to heart, and this friend is now my cycling guru. I mentioned my taking up cycling to my 10-year-old daughter, who at first looked at me like I’d grown a second head and said I couldn’t possibly learn to ride a bike again at my age.

Ouch. Then she changed course and said it was a great idea.

My husband did not look at me like I’d gone insane and was supportive of me buying a bike and learning to ride again. I talked to another friend who is about my age and an avid cyclist and got some advice from her before taking the plunge and buying a bike.

Incidentally, my cycling guru is also close to my age, and I know other people much older and younger than me who are also avid cyclists. Cycling knows no age limits! 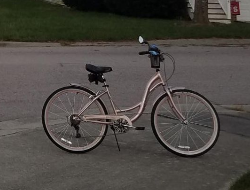 Since I didn’t know whether I’d be able to re-learn how to ride a bike or how much I’d end up riding, I decided to start with an inexpensive bike from Walmart, which turned out to be a decent choice. It’s not the most durable or lightweight of bikes, but it has served me well as a beginning cyclist. It was also pre-assembled and ready to take home and ride.

What I didn’t know in February 2020 when I bought my bike is that a pandemic would hit the world a few weeks later and there would be a run on bikes. Everyone and his brother felt the need to start biking to get out of the house and get some exercise. I’m incredibly grateful that my friend suggested I try cycling and that I took his advice and bought a bike before the pandemic rush hit.

I not only learned to ride again, but my daughter and I have made good progress in gradually increasing our mileage. We have fun riding together, and we get out of the house several times a week during a time when we hardly go anywhere else due to the pandemic.

Here are a few things I wish I’d known before I started cycling. 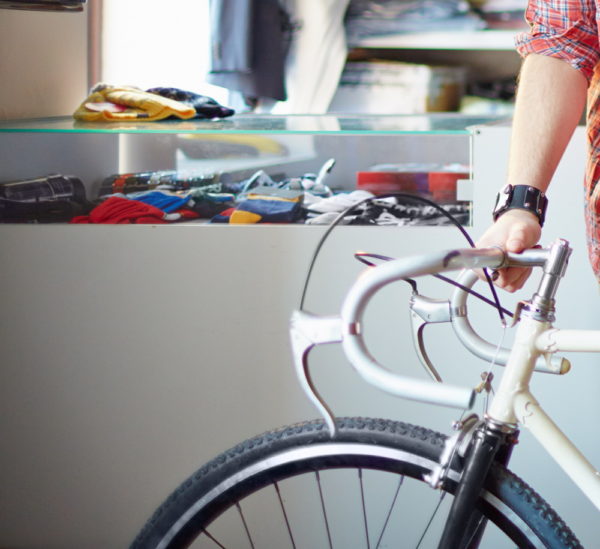 Days Off Have New Meaning

One of my cycling friends did warn me that once I started cycling, I’d never want to take a vacation again that didn’t involve cycling. I didn’t really believe her. At the time, I didn’t even know if I could ride, let alone take long rides as part of a vacation trip.

Then the cycling bug hit me, and I’ve never been the same since. My cycling guru told me about ebikes (electronic assist bicycles) available for rental in my area and said I should give them a shot.

They were so much fun that I’ve rented ebikes four times – once by myself and the rest with friends.

The first paid day off I took since taking up cycling, I rented an ebike and took a long ride in the morning.

I went away for the long Labor Day weekend without my bike and wished the whole time I could have brought my bike and found somewhere to ride.

I recently had another paid day off from work, a holiday, and I spent a couple of hours of the morning riding my newly purchased ebike.

You can see what’s happening here. My days off all involve biking or the desire for biking, which I never expected to happen. 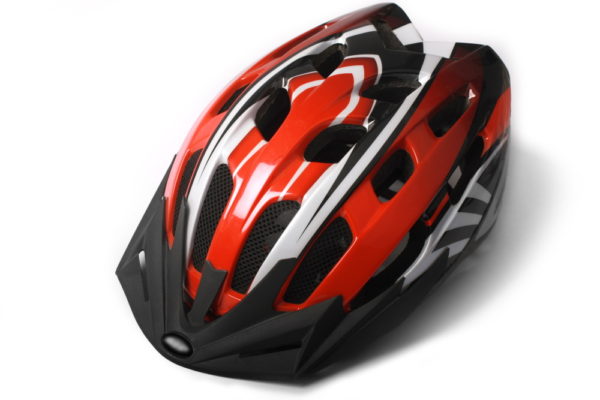 Of course, buying a bike requires that you buy a helmet. That’s a no brainer.

After you start biking, you realize that you need a rearview mirror. Pretty soon, you need a reusable water bottle. If your bike doesn’t have a cup holder, you’ll need one of those or a bottle cage, or both, depending on how far you ride and how much water you drink.

I bought biking shorts, and as the weather gets cooler, I’ll need some pants to wear while cycling.

Soon, you decide that you might want to take your bike other places to ride, and for that, you need a bike rack. To install a good bike rack, you need to have a trailer hitch installed on your vehicle.

Before too long, you’ll have a flat tire and realize that you need to have certain tools on hand along with spare bike tubes in the ride sizes. You should also carry these around with you, and therefore, you’ll need a bike pack, plus a compact bike pump to take along with your tools and extra inner tube.

Your bike chain will need cleaned and lubed periodically, so add some chain lube to your Amazon shopping cart, too.

Later, after the fall time change, I’ll need some bike lights so I can ride after dark.

After a few months of cycling, we realized that my daughter had outgrown her bike and needed a new one, so I purchased a larger bike for her.

I’m sure I haven’t covered everything that I’ve spent money on since I started cycling, but you get the idea.

Buying a bike is just the proverbial tip of the iceberg. Cycling can certainly take a toll on the finances. I look at it as an investment in my health and fitness, and my daughter’s. 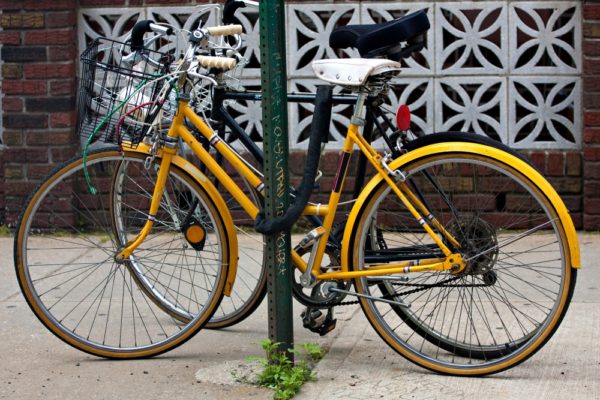 This is definitely not something I understood from the get-go. Nor did I fully grasp how many different types of bikes there are for different types of cycling, though my cycling guru has enlightened me over the past several months. I am not sure what his N (number of bikes) is at this point, but it’s a lot.

I’m including a photo in this post of an ebike rental station in the city where I live. Due to a corporate sponsorship, they cost only $2 to rent for 45 minutes. 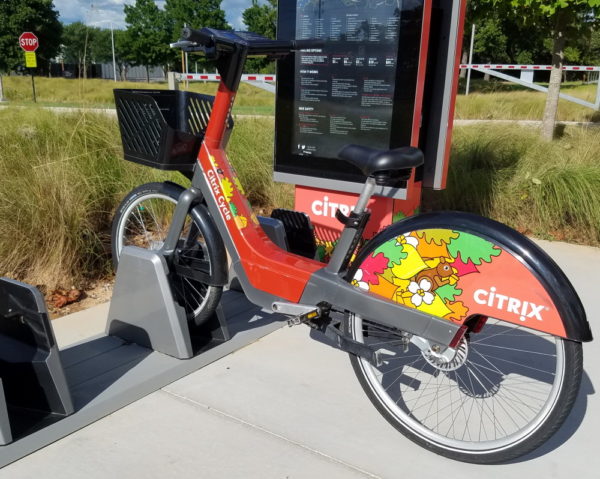 Since I fell in love with the ebike rentals, I’ve wanted to buy an ebike for myself. Due to the pandemic rush on bikes, they were out of stock for months before I could finally get one.

Contrary to what you might think, you still get a good workout riding an ebike. It’s not like a moped or motorcycle – you still pedal, but there’s a battery and motor that gives you pedaling assistance when needed. Therefore, you can go faster and further in your rides. The ebike’s seat was really uncomfortable, so I’ve already replaced it (see the item above about always needing to buy more gear). Other than that, it’s incredibly fun, and I look forward to riding it more.

At this point, when I ride with my daughter, I ride the Walmart bike. When I’m on my own, I’m on the ebike.

My cycling guru has yet to suggest that I try mountain biking, but you never know what might happen in the future.

Bikes take up space. With my two bikes and my kid’s one bike, plus two cars in the garage and all the stuff that accumulates in people’s garages, something will soon have to give. It seems like no matter how often I go through stuff in the garage and get rid of as much as I can, more stuff keeps appearing.

Now with the bikes and related gear, I’ll need to make another major riddance so that I have room for everything. Some cycling enthusiasts have an entire extra room devoted to their bikes. 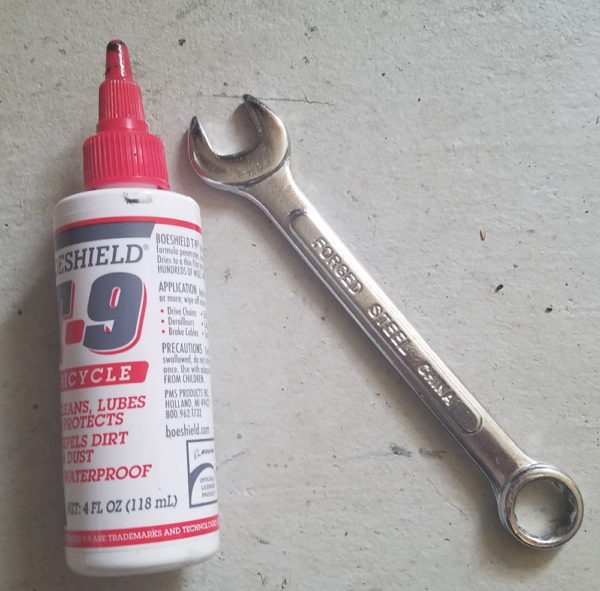 As of this writing, I’ve been cycling for about 8 months and have had three flat tires, all on the rear tire which is much harder to fix than the front tire due to the chain and gears.

My cycling guru fixed the first two for me. The third one, I attempted to fix on my own but ended up needing help getting the tire back on correctly. I made a giant mess in the process, too, getting black chain lube everywhere.

My cycling guru assembled both new bikes – my kid’s new one and the ebike I just bought. He didn’t even look at the instructions, which is good in the case of the ebike since the instructions were basically worthless.

He also noticed at one point that my regular bike, the one from Walmart, wasn’t put together correctly. He corrected some issue with the cables in the front, vastly improving how well my bike handles. He’s also helped me with the bike fit to make the ride more comfortable.

The upshot? I can fix computers and perform minor household maintenance and repairs, but apparently, fixing and assembling bikes isn’t my thing. I wasn’t expecting so many flat tires and didn’t know ahead of time how hard changing a bike tube would be.

You’ll notice I’ve mentioned my cycling guru a number of times in this post. If you’re new to cycling and don’t have a cycling guru, you’ll do well to find one. Ask around your friends to see who already rides and can give you advice.

If you’re not mechanically inclined, you’ll need someone who can fix your biking issues, too, especially flat tires, and also assemble any new bikes you acquire. I’m hoping to learn how to change bike tubes on my own in the event of a flat tire, but my first attempt at this was rather discouraging. Relying on a bike shop every time you have a flat will likely cost a lot of money and take a lot of time away from your cycling.

Cycling provides my daughter and me loads of fun times together plus great exercise. I hope we can both continue cycling for many years to come. 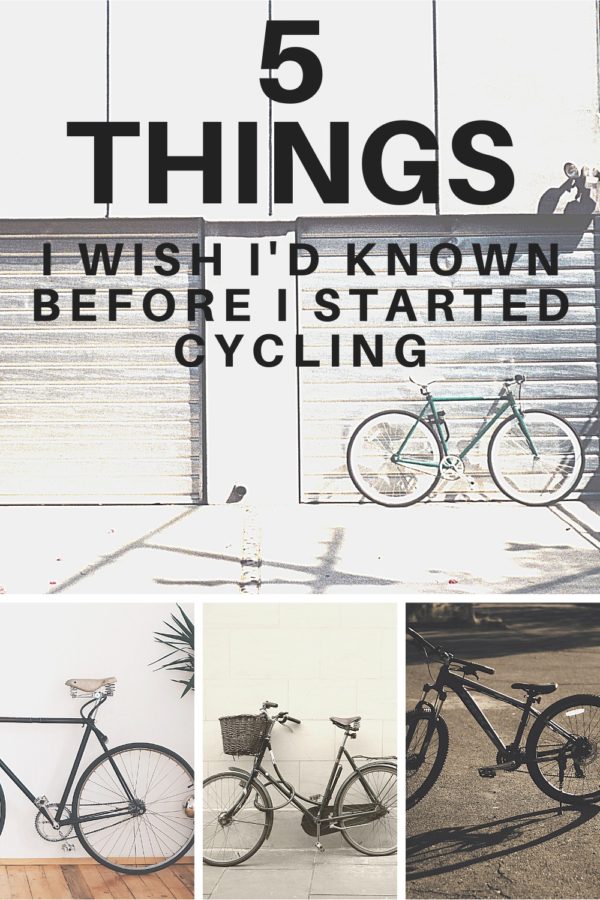