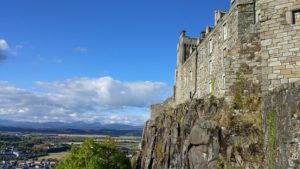 If you haven’t read the fabulous Outlander novels by Diana Gabaldon, you’re missing out on some of the best books out there. If you’re watching the fantastic Outlander TV show on STARZ, keep in mind that season 3 follows the third book, Voyager, and there are 8 Outlander books.

Do you want to wait 5 more years to see what else happens to Outlander’s beloved characters? Plus, the TV show necessarily leaves out quite a bit of material that’s in the books.

The books also feature snappy dialog and dozens of quotable quotes in each novel. Some of them end up as part of a TV episode, and some don’t. These 40 quotes (in no particular order) are just a sampling of what you’ll read in the 8 Outlander novels.

1.  “Does it bother you that I’m not a virgin?”
He hesitated a moment before answering.
“Well, no,” he said slowly, “so long as it doesna bother you that I am.” He grinned at my drop-jawed expression, and backed toward the door.
“Reckon one of us should know what they’re doing,” he said. (Outlander)

2.  “D’ye think I don’t know?” he asked softly. “It’s me that has the easy part now. For if ye feel for me as I do for you, then I’m asking you to tear out your heart and live without it.” (Dragonfly in Amber)

4. “Aye, well, he’ll be wed a long time,” he said callously. “Do him no harm to keep his breeches on for one night. And they do say that abstinence makes the heart grow firmer, no?”

“Absence,” I said, dodging the spoon for a moment, “and fonder. If anything’s growing firmer from abstinence, it wouldn’t be his heart.” (Voyager)

5. “You dinna need to understand me, Sassenach,” he said quietly. “So long as you love me.” (Dragonfly in Amber)

6. “Catholics don’t believe in divorce. We do believe in murder. There’s always confession, after all.” (An Echo in the Bone)

7. “This is our time. Until that time stops – for one of us, for both – it is our time. Now. Will you waste it, because you are afraid?” (Drums of Autumn)

8. “The most irritating thing about cliches, I decided, was how frequently they were true.” (Voyager)

9. “No wonder he was so good with horses, I thought blearily, feeling his fingers rubbing gently behind my ears, listening to the soothing, incomprehensible speech. If I were a horse, I’d let him ride me anywhere.” (Outlander)

10. “When the day shall come, that we do part,” he said softly, and turned to look at me, “if my last words are not ‘I love you’—ye’ll ken it was because I didna have time.” (The Fiery Cross)

11. “While the Lord might insist that vengeance was His, no male Highlander of my acquaintance had ever thought it right that the Lord should be left to handle such things without assistance.” (The Fiery Cross)

12. “Aye, I believe ye, Sassenach. But it would ha’ been a good deal easier if you’d only been a witch.” (Outlander)

13. “Sassenach. He had called me that from the first; the Gaelic word for outlander, a stranger. An Englishman. First in jest, then in affection.” (Dragonfly in Amber)

14. “Torn between the impulse to stroke his head, and the urge to cave it in with a rock, I did neither.” (Dragonfly in Amber)

15. “For a long time,” he said at last, “when I was small, I pretended to myself that I was the bastard of some great man. All orphans do this, I think,” he added dispassionately. “It makes life easier to bear, to pretend that it will not always be as it is, that someone will come and restore you to your rightful place in the world.”
He shrugged.
“Then I grew older and knew that this was not true. No one would come to rescue me. But then-” he turned his head and gave Jamie a smile of surpassing sweetness.
“Then I grew older still and discovered that after all, it was true. I am the son of a great man.”
The hook touched Jamie’s hand, hard and capable. “I wish for nothing more.” (Fergus, talking to his adoptive father, Jamie, An Echo in the Bone)

Ian shook his head, his dark hair lifting wildly in the wind.

17.  The dog would run a few steps toward the house, circle once or twice as though unable to decide what to do next, then run back into the wood, turn, and run again toward the house, all the while whining with agitation, tail low and wavering.
“Jesus H. Roosevelt Christ,” I said. “Bloody Timmy’s in the well!”
(A Breath of Snow and Ashes)

19. “I know why the Jews and Muslims have nine hundred names for God; one small word is not enough for love.” (Voyager)

20. “This wife you have,” Bird said at last, deeply contemplative, “did you pay a great deal for her?”

“She cost me almost everything I had,” he said, with a wry tone that made the others laugh. “But worth it.” (A Breath of Snow and Ashes)

22.  “I’ll leave it to you, Sassenach,” he said dryly, “to imagine what it feels like to arrive unexpectedly in the midst of a brothel, in possession of a verra large sausage.” (Dragonfly in Amber)

23.  “There is an oath upon her,” he said to Arch, and I realized dimly that he was still speaking in Gaelic, though I understood him clearly. “She may not kill, save it is for mercy or her life. It is myself who kills for her.” (A Breath of Snow and Ashes)

24.  “For I have lied, and killed, and stolen; betrayed and broken trust. But there is one thing that shall lie in the balance. When I shall stand before God, I shall have one thing to say, to weigh against the rest.” His voice dropped, nearly to a whisper, and his arms tightened around me.
“Lord, ye gave me a rare woman, and God! I loved her well.” (Dragonfly in Amber)

27.  “I thought he said you weren’t drunk if you could find your arse with both hands.”

He eyed me appraisingly. “I hate to tell ye, Sassenach, but it’s not your arse ye’ve got hold of—it’s mine.”

“That’s all right,” I assured him. “We’re married. Share and share alike. One flesh; the priest said so.” (Drums of Autumn)

28.  “You invent yourself…You look at other women or men; you try on their lives for size. You take what you can use, and you look inside yourself for what you can’t find elsewhere. And always…always…you wonder if you’re doing it right.” (The Fiery Cross)

29.  “We got half the doggone MIT college of engineering here, and nobody who can fix a doggone television?” Dr. Joseph Abernathy glared accusingly at the clusters of young people scattered around his living room.

30.  “I’ve all my teeth, none of my parts are missing, and my c__ still stands up by itself in the morning. It could be worse.” (The Fiery Cross)

31.  “Judging by the state of your hair, Sassenach, I should say that it’s going to rain verra soon now.” (Voyager)

32.  “I have loved ye since I saw you, Sassenach,” he said very quietly, holding my eyes with his own, bloodshot and lined with tiredness but very blue. “I will love ye forever. It doesna matter if ye sleep with the whole English army—well, no,” he corrected himself, “it would matter, but it wouldna stop me loving you.” (Written in My Own Heart’s Blood)

33.  Roger, listening intently, couldn’t keep from asking a question at this point. “Is it true Colonel Stark said ‘Don’t fire till you see the whites of their eyes?'”

Lee coughed discreetly. “Well sir. I couldn’t say for sure as no one said that, but I didn’t hear it myself. Mind, I DID hear one colonel call out, ‘Any whoreson fool wastes his powder afore the bastards are close enough to kill is gonna get his musket shoved up his arse butt-first!”  (A Breath of Snow and Ashes)

35.  “Money might not buy happiness, I reflected, but it was a useful commodity, nonetheless.”  (The Fiery Cross)

36.  “He wanted to ask whether she were insane, but he had been married long enough to know the price of injudicious rhetorical questions.”  (Breath of Snow and Ashes)

38.  “Perhaps it was only that the sense of reaching out to something larger than yourself gives you some feeling that there is something larger – and there really has to be, because plainly you aren’t sufficient to the situation.” (An Echo in the Bone)

39.  “I might have considered this a simple attempt to remove his foot from his mouth, were it not for the fact that naked men are conveniently equipped with sexual lie detectors. He did like it fine.”  (The Fiery Cross) 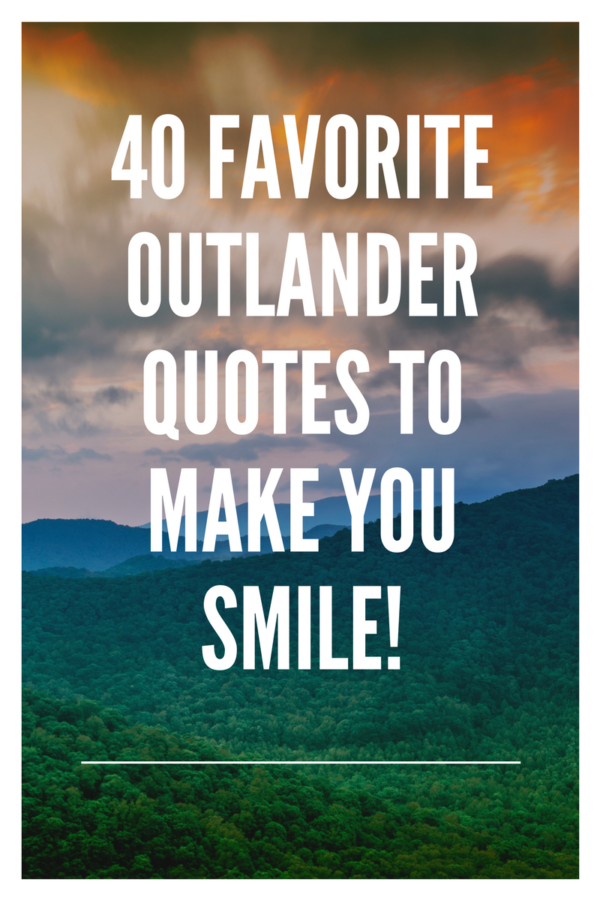 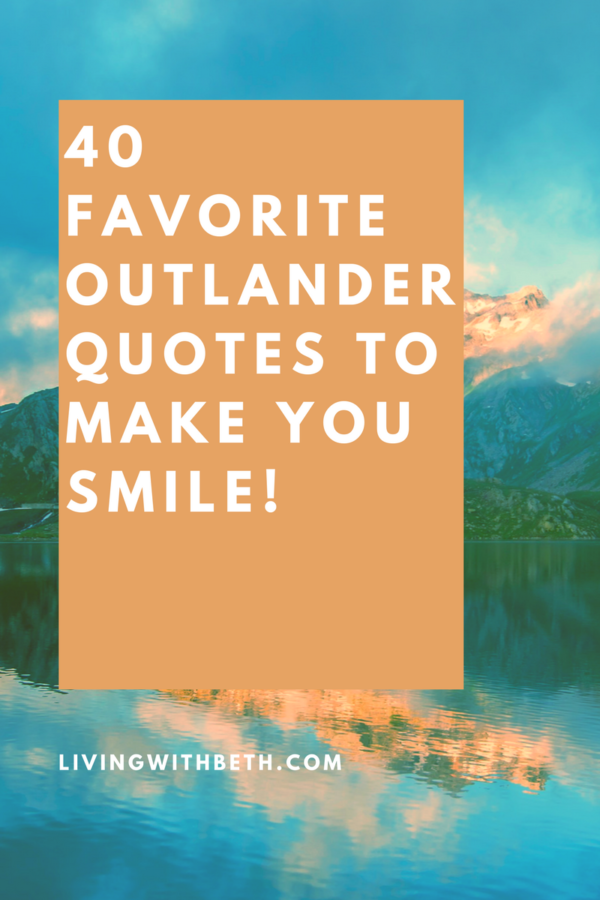 Try 3 Months of Amazon Music Unlimited For Only 99 Cents!